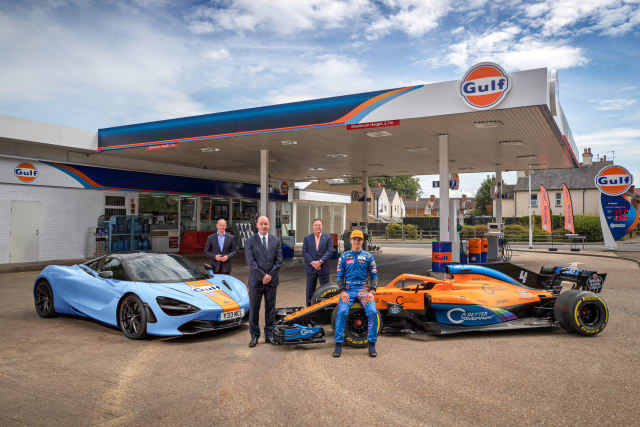 McLaren has entered into a new partnership with Gulf Oil, reigniting a collaboration between the pair for the first time in more than 20 years.

Gulf will now provide oil for McLaren road cars from 2021, while its branding will be used across the supercar manufacturer’s events.

Not only that, but Gulf’s roundel will be used on McLaren Racing’s F1 car from this weekend’s British GP, with the logo appearing on the vehicle’s engine cover and mirror housings.

A small number of customers will also be given the option to have their McLaren supercar hand-painted by McLaren Special Operations in Gulf liveries and colours.

Gulf’s tie-in with McLaren first started in 1968 until the end of the 1973 season. Its partnership was restarted once more at the Le Mans 24 Hours in the 1990s, with the McLaren F1 GTR using Gulf colours throughout the decade.

Mike Flewitt, chief executive officer, McLaren Automotive, said: “It’s great to be able to welcome back Gulf after a long historical association which has seen the name adorn many McLaren road cars and race cars over the years. McLaren has a rich history of working with class-leading partners and we’re delighted to continue this trend via our renewed partnership with Gulf. Like McLaren, the Gulf name is synonymous around the world with technical excellence and innovation and the excitement of going racing and motoring.

“Every supercar will have Gulf fuel and lubricants when it leaves the McLaren Production Centre and I know our customers will be thrilled to be able to work with our in-house bespoke team on the option of being one of the few to be able to personalise their McLaren supercar in the iconic Gulf livery.”