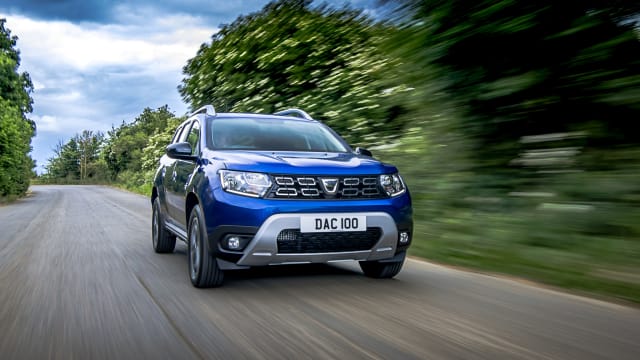 Dacia has a problem on its hands. While its models are hugely successful (170,000 have been sold in the seven years the Renault-owned firm has been in the UK), its low prices don’t bode well with the rise of electrification.

The firm has been slow to commit to hybrids and EVs, though the latter is set to be available in 2021, so how do you offer a simple low-cost solution to lowering CO2 emissions and, more importantly, save money for buyers?

Well, Dacia’s got a rather simple solution – LPG gas. Costing half the price of petrol, it’s an appealing fuel that, surprisingly given its cost-saving benefits and cheap implementation, is not one favoured by manufacturers any more.

Dacia becomes the only firm in the UK to offer LPG and it calls its system ‘Bi-Fuel’, as you can choose to run it on either petrol or LPG gas, and it’s available across all Dacias equipped with the 1.0-litre TCe petrol engine. Here, we’re trying the system on the Duster crossover, though you can have it on the Sandero supermini and Logan MCV estate, too.

The only difference next to a standard model is the 34-litre LPG gas tank, which is placed where you’d find a spare wheel, but actual boot space is entirely unaffected. There’s no clever (and thus expensive) digital displays showing how the system works, but rather a simple switch underneath the electric mirror stalk allowing you to flick between LPG and petrol. In true Dacia fashion, it’s a simple and no-frills way of doing it.

You get the same turbocharged 1.0-litre TCe petrol engine found in the regular Duster powering this version – which produces 99bhp – though Dacia has managed to find an extra 10Nm of torque when running on LPG – increasing it to 170Nm.

Don’t buy the Duster for its performance though, as this is not a quick car with 0-60mph taking 13.6 seconds. On paper, Dacia claims it’s 0.6 seconds quicker to 60mph on LPG, though you’d be hard-pressed to tell the difference.

With petrol and gas combined, Dacia claims you can travel an impressive 620 miles before needing to fill up.

In terms of running costs, fuel economy dips quite significantly when running on LPG (dropping from 44.1mpg to 35.3mpg), but CO2 emissions are lower on gas – going from 145g/km to 129g/km.

Nothing has changed with the way the Duster drives, and despite being slow, it’s a model that’s really quite enjoyable behind the wheel.

The small 16-inch alloy wheels with chunky tyre walls on our mid-spec test car mean you could plough through potholes without a second thought, and even on rough roads, it’s impressively comfortable. While you’ll have to rev the not-especially-refined engine to get it to speed, once it’s there it’ll sit happily enough at motorway speeds without too much fuss, even though the five-speed manual transmission could do with a sixth gear.

Our only real gripe is that taller drivers may find it a bit claustrophobic, as the sloping windscreen makes you feel as if you’re sitting overly close to the glass.

For buyers wanting chunky styling from their crossover, the Duster crossover is a superb fit. With its high ride height, chunky plastic sills and wide wheelarches, it looks like it means business. Even if all Bi-Fuel versions are front-wheel-drive only…

You can also make it look as plush or as basic as you like, with entry-level Access versions looking like they’ve just been dragged out of the desert (in a reassuringly rugged way). Meanwhile, at the other end of the spectrum, top-spec Prestige models with their large diamond-cut 17-inch alloy wheels offer more in the way of style.

Reassuringly basic is the best way to describe the Duster’s cabin. You won’t find a whiff of soft-touch plastics or, ahem, ‘premium feel’ in this Dacia, but rather hard and scratchy plastics that feel like they’ll last the test of time.

In our mid-spec Comfort model, though, it actually features a seven-inch touchscreen with satellite navigation and Apple CarPlay and Android Auto – you don’t even get the latter on a £30,000 Range Rover Evoque. The system is about as no-frills as you can get, but it does the job and on a cheap car like this, it’s all you can ask for.

The Duster’s also impressively roomy. Sure, there’s no room for a spare wheel thanks to the LPG tank, but such few cars come with them these days anyway that it’s not an issue. The boot itself is big for a car of this class – measuring 445 litres – though rear space isn’t quite so generous.

The Duster remains the cheapest crossover on sale and one of the UK’s most affordable cars, with prices kickstarting from £11,245, though you’ll need to upgrade to the Essential trim to be able to pick a Bi-Fuel model. Given the LPG models cost a mere £400 more than the petrol model, choosing it seems like a no-brainer.

While your local fuel station might not have LPG, given around 1,200 forecourts do across the UK, you’re unlikely to be far away from one, and the process of filling up is easy (though you might have to use an adaptor that Dacia supplies). And given LPG costs around 60p a litre, it’s nearly half the price of petrol. Dacia says you can expect to save £600 each year by running on LPG, which would soon stack up over a period of years.

In terms of spec, the mid-spec Comfort grade is the one to go for and costs £14,695 here. It comes with everything you need, and nothing you don’t, with highlights including all-round electric windows, the aforementioned touchscreen, a reversing camera, rear parking sensors, cruise control and air conditioning.

Given Dacia is all about value and saving people money, the introduction of this factory-fitted LPG gas offering is a brilliant addition to the firm’s range. Considering the system adds a minimal £400 to the price, the fact it brings no setbacks and the potential to save £600 on petrol costs each year, it’s definitely worth considering.

Adding to that, the Duster is a brilliant no-nonsense crossover. Yes, it’s not premium, it’s not techy and it’s not particularly refined, but if you’re not fussed about a fancy badge or having all the gadgets, it offers truly terrific value. Even more so in this new Bi-Fuel form.