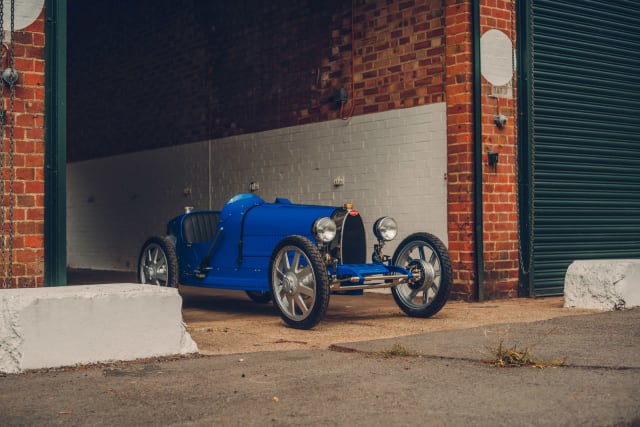 Bugatti has kickstarted production of its scaled-down Baby II.

A reimagining of the original Baby created by Ettore Bugatti for his youngest son Roland, the new scaled-down car is limited to just 500 units worldwide.

Finally, there’s a Pur Sang edition which is aimed at collectors. It uses the same powertrain as the Vitesse, but utilises a hand-formed aluminium body which requires two hundred hours of craftsmanship to make.

Stephan Winkelmann, President of Bugatti, said: “Ettore Bugatti himself was already interested in catering to the children of Bugatti enthusiasts and designed the Type 52 miniature car as a genuine Bugatti. That was a sensation at the time.

“We are continuing this tradition with the new edition of the Bugatti Baby II, and I am delighted that we have found The Little Car Company, a partner that shares the same values as us. With the Bugatti Baby II, we invite a young generation of enthusiasts to fall in love with the wonderful world of Bugatti.”

And whereas the original Baby was certainly compact in its dimensions, its descendant has been designed to fit those aged fourteen and above. Base models have a top speed of 30mph, while Vitesse and Pur Sang versions are capable of hitting 42mph – and can hit 37mph in just under six seconds depending on the weight of the driver.

It also packs regenerative braking technology which can help to top up the batteries using energy produced when slowing down, contributing to its overall charge.