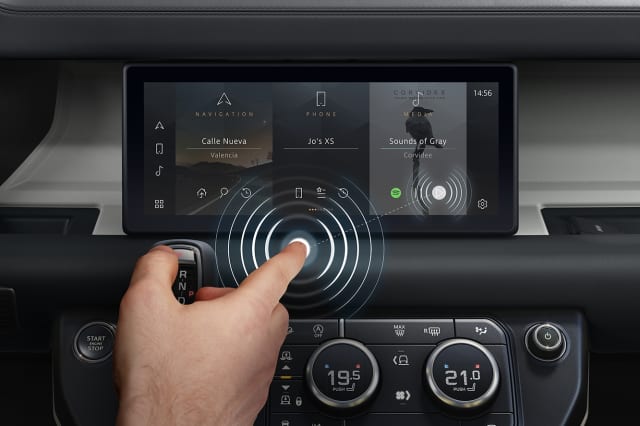 Jaguar Land Rover has created a new contactless infotainment system which it hopes will help to both keep drivers’ eyes on the road and reduce the spread of bacteria and viruses.

Referred to as ‘predictive touch’ and developed in conjunction with the University of Cambridge, the technology uses artificial intelligence and sensors to predict where a user is going to touch without having to press a single button.

It’ll be used to control features like the satellite navigation, media functions or temperature controls within a car’s infotainment system. It works by tracking hand movements through a variety of sensors – both vision- and radio frequency-based – to work out which ‘button’ the user intends to press.

Lab testing and further trials have shown that predictive touch could help to reduce a driver’s interaction with a touchscreen by up to 50 per cent, reducing the likelihood of bacteria transmission.

In addition, the system provides further ease-of-use when driving over rough terrain or poor roads – areas where a touchscreen can often be difficult to operate. To use an infotainment system when travelling on uneven surfaces can often cause the driver to spend more time focusing on the screen than they should, so this latest development would reduce the potential for distraction too.

Lee Skrypchuk, human machine interface technical specialist at Jaguar Land Rover, said: “As countries around the world exit lockdown, we notice how many everyday consumer transactions are conducted using touchscreens: railway or cinema tickets, ATMs, airport check-ins and supermarket self-service checkouts, as well as many industrial and manufacturing applications. Predictive touch technology eliminates the need to touch an interactive display and could therefore reduce the risk of spreading bacteria or viruses on surfaces.

“The technology also offers us the chance to make vehicles safer by reducing the cognitive load on drivers and increasing the amount of time they can spend focused on the road ahead. This is a key part of our Destination Zero journey.”

The new system is part of Jaguar Land Rover’s Destination Zero plan, which aims to make its vehicles both cleaner and safer.