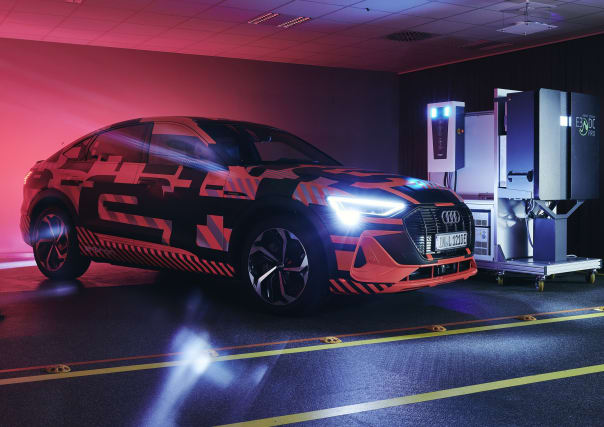 Audi has announced that it has started work on bi-directional charging which would allow EVs to give energy back to the grid.

The system allows electricity kept in home stores to power EVs, but would also mean that electric vehicles could give energy back.

Developed in partnership with Hager Group, the technology could be particularly beneficial – according to Audi – to those users with solar panels as excess electricity could be stored temporarily and then used when required.

Martin Dehm, technical project manager for bidirectional charging at Audi, said: “Electric mobility is bringing the automotive industry and the energy sector closer together. The battery of an Audi e-tron could supply a single-family home with energy for around one week independently. Looking ahead, we want to make this potential accessible and make the electric car part of the energy transition as an energy storage device on four wheels.”

The technology sees the EV as a ‘decentralised storage medium’ which is capable of temporarily holding electricity. Taking solar power as an example, if a home is being run by the power of the sun during the day, any excess energy produced during the time can be fed and stored to the car.

Then, when night arrives, the car can feed the same ‘green’ energy back to the home, which will then be able to run on the solar power generated earlier.

Audi tested out the system with an e-tron model and used a DC wallbox with a charging capacity of up to 12kW. The German manufacturer also found that because of the overall DC voltage level in the grid as a while, an inverter wasn’t needed, helping to streamline the process further.

Thousands of cars put into storage due to pandemic

BMW i3 to be replaced by an electric 1 Series