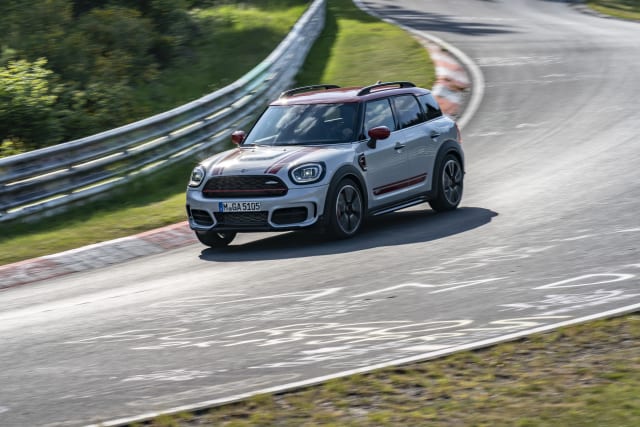 Mini has revealed the updated Countryman John Cooper Works, with the performance version of the firm’s SUV getting updates that were issued across the rest of the range earlier this year.

On the outside, updates include a redesigned front grille with a one-piece chrome frame surround, larger diameter exhausts and a choice of two new metallic colours: White Silver and Sage Green.

There are also LED headlights all round, with the Countryman now getting the signature Union Jack tail lights as introduced across Mini’s other models. The headlights also now have an optional intelligent light distribution technology that adapts to traffic and weather conditions.

Inside, the Countryman gets the five-inch digital instrument display first introduced on the Mini Electric, while the standard infotainment system now gets Bluetooth connectivity. It also has an integrated SIM card so the car is always online, enabling the use of Intelligent Emergency Call.

Under the bonnet, the 302bhp engine remains, and is notable for being the most powerful unit ever used in a production Mini. It’s mated to an eight-speed automatic transmission with power fed through all four wheels.

The new Mini Countryman John Cooper Works is available to order now from £36,000.