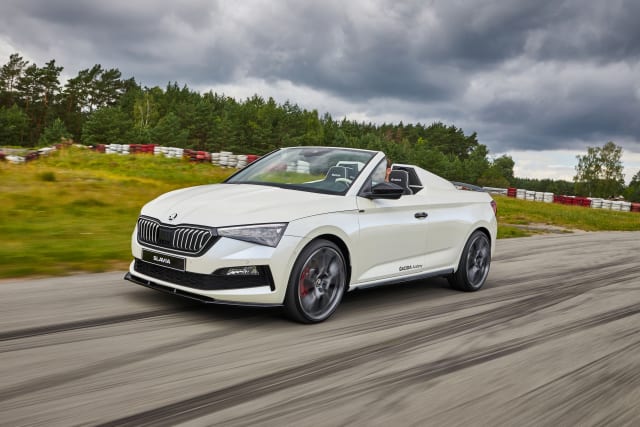 Skoda’s Student Car project has produced yet another striking concept – the Slavia.

Essentially a convertible version of the firm’s Scala, the Slavia isn’t intended to enter production but instead showcase the talents of 31 trainees.

Taught at the firm’s vocational school in Mladá Boleslav, Czech Republic, the students are the latest to have produced a vehicle as part of the project which has previously seen a Mountiaq pick-up created.

Its design has been influenced by the looks of the Skoda 1100 OHC sports prototype of 1957. The Slavia – which is named after the bicycles produced by the Czech firm’s founders Václav Laurin and Václav Klement – has a reinforced underbody and welded rear doors to help it remain as rigid as possible with the roof removed.

Wheels from the Kodiaq vRS sit on all four corners and house a brake system and wheel hubs from the sporty Octavia vRS. The interior has been treated to four-point seatbelts and Sparco race seats, while LED lights on the sills project the three colours of the Czech flag.

Alois Kauer, who took over as head of the Skoda Academy in February 2020, said: “The Student Car is the Skoda vocational school’s annual flagship project. For the seventh year running, our students are demonstrating the high standard of our in-house training by planning, designing and building an impressive one-off car.

“We enable them to design their dream car, working with professionals from our various departments. As a result, their training already familiarises them with processes that will become part of their working lives later on, when they graduate from our vocational school and embark on a career in our company.”