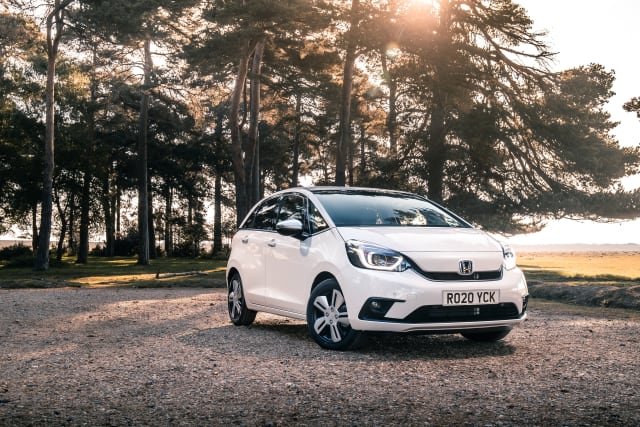 In the lucrative small car market, there’s one car that’s been largely underrated. While the likes of the Ford Fiesta and Vauxhall Corsa dominate the sales charts, the Honda Jazz has quietly pootled on, offering reliability, low running costs and impressive practicality – but not troubling the top dogs in terms of sales.

Now, however, there’s a new model in town that Honda will be hoping changes that somewhat. It’s got a funky new look and a hybrid powertrain to keep running costs low. It’s time to find out if it retains everything buyers loved while enticing new customers across from the big sellers.

The main talking points are the looks and the powertrain, two things we’ll delve into more later in this review. However, the quick overview is that the Jazz retains similar proportions and silhouette to its predecessor, now with a more quirky front end, while under the bonnet the hybrid should be inexpensive to run.

Other updates of note include the new design with a much narrower A-pillar to improve visibility, while the infotainment touchscreen has been updated and gets new connectivity functions.

For Honda, the powertrain is the key talking point, because the Jazz is the first of the company’s cars to wear the new e:HEV badging that will adorn future electrified models.

It uses a 1.5-litre petrol engine and two electric motors, with the car trying to drive on electric where possible and the engine largely being used as a generator to feed the battery. It means that when you’re driving around town in particular, it’s a lot like driving a fully electric vehicle.

When the engine does kick in, it’s smooth to do so, but does have a rather coarse sound that’s particularly noticeable under acceleration. Like an EV it’s responsive to inputs as well, but the CVT-like gearbox isn’t massively appealing.

It’s immediately clear that the Jazz continues its ethos of being safe and dependable from behind the wheel. That powertrain might be responsive but it’s not quick, and encourages a more sedate driving style that’s easy to settle into.

Thanks to that massive windscreen, visibility is fantastic, so as an inner-city commuter there are a few rivals that are easier to thread through traffic. It rides pleasantly too, whether in town or cruising on the motorway, though it’s definitely more comfortable at lower speeds.

While the previous generation Jazz might best be described as nondescript, the new model goes some way to add a little character. From most angles it’s just as uninspiring as before, blending into the background, but that understated design will be appealing to some.

However, where it’s better is around the front, where the oddball chunky headlights and narrow grille give it a funky, retro Japanese kei car look. It could prove divisive, but in a segment where character is often key it could help pull mainstream customers across.

The previous Jazz’s trump card was the cavernous interior, and the new Jazz continues this trend. When you drop behind the driving seat, there’s a massive glasshouse around you that makes the cabin feel extra spacious as well as offering fantastic views of the road ahead.

The dashboard design echoes the minimalism of the exterior, with a great compromise between relegating physical buttons to the touchscreen but keeping popular functions, such as the climate controls, on the dash. The single spoke steering wheel is a fun design, but the small instrument screen does already feel a little dated.

The Honda Jazz starts at £18,985 in SE trim, with standard equipment including adaptive cruise control, climate control, ‘Magic Seats’, and auto headlights. Upgrade to SR, starting from £20,185 and there’s fabric and leather upholstery, Wireless AppleCarPlay (which only works intermittently in our test car, frustratingly), front and rear parking sensors and the 9.0-inch Honda Connect infotainment system.

Step up to the top-spec EX trim seen on our test car, with prices starting at £21,385, and there’s an impressive equipment list that includes smart entry and start, 16-inch alloy wheels, heated steering wheel and front seats, rear-view camera, and Garmin navigation integration for the infotainment system.

The EX feels like the best value, because jumping up just a few thousand pounds gains you an impressive amount of kit. The entry level SE feels like good value with decent equipment, but it does only have a five-inch infotainment system and lacks Apple CarPlay.

It’s immediately clear when driving the Honda Jazz that this new version will do nothing to change the model’s perception of being relatively dull but dependable. It’s a shame the Japanese firm couldn’t inject a little fun into this supermini, which works so well for its rivals.

However, it’s carved its own niche in being the ultra practical option in this segment that will massively appeal to those who aren’t passionate about their mode of transport. It’s the ultimate head over heart supermini.