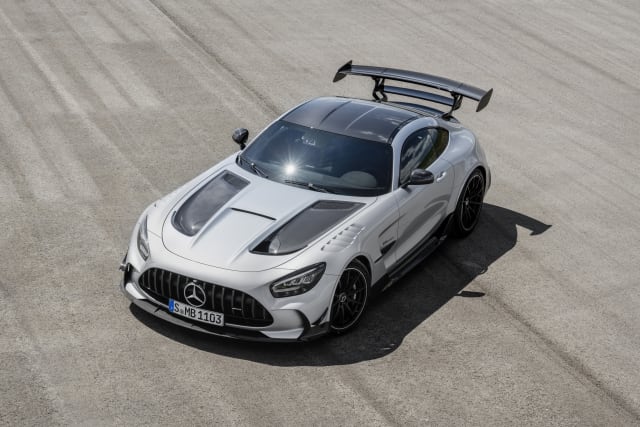 This is the Mercedes-AMG GT Black Series, the most hardcore version of the German supercar yet – with the most powerful AMG V8 engine ever made.

It has been designed to embody AMG’s motorsport know-how in a track-focused but road legal car, and as such it boasts an uprated engine and extensive exterior styling modifications.

The engine is an ‘extensively redeveloped’ version of the twin-turbo 4.0-litre V8 engine that makes 720bhp and 800Nm of torque. AMG usually uses a ‘cross plane’ crankshaft but has switched to a ‘flat plane’ for this engine, which improves performance and throttle response.

The result of this enhanced performance is a 0-60mph time of three seconds, while 124mph comes up in less than nine seconds, before going on to a top speed of 202mph.

To help keep the car on the road with all that extra power, there have been extensive aerodynamics upgrades. Inspired by the GT3 and GT4 race cars, the GT Black Series gets improved cooling for the radiators, with small wings on the outer edge of the front bumper directing air for cooling and increasing downforce.

There’s also a carbon-fibre front splitter with Street and Race configurations, larger exhaust air outlets, a new rear diffuser and various other upgraded parts that increase downforce. There’s also extensive carbon-fibre use to bring weight down, including the roof, tailgate and bonnet, as well as smaller pieces throughout.

Buyers in most markets can also opt for a Track Package that includes a roll-over protection system, four-point seat belts and a fire extinguisher.

Those looking for the ultimate Mercedes-AMG GT will find it doesn’t come cheap, though, with UK prices starting at £330,000.