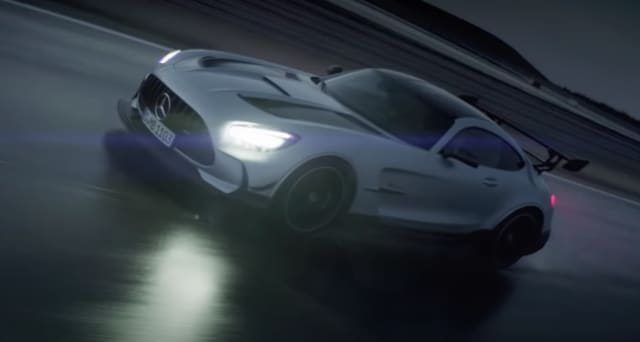 Mercedes-AMG has revealed its GT Black Series in an official new video.

The video, which was posted to social media, shows the range-topping supercar being used around a wet circuit. With a huge rear wing and plenty of additional aerodynamic features, the Black Series’ motorsport-related influence is easy to see.

As well as the large rear wing, the video shows a wide rear diffuser and a huge front splitter which should all help to keep downforce levels high.

The AMG GT Black Series will likely use a modified version of the regular GT’s 4.0-litre twin-turbocharged V8, and is rumoured to produce around 680bhp.

The most powerful GT currently available is the GT 63 4-door Coupe, which produces 630bhp from the same 4.0-litre engine. If the GT Black Series’ engine performance matches the rumours, then it will sit atop the range as the most powerful.

However, as with previous Black Series models, this latest GT will be engineered with steering and handling in mind, with the various aerodynamic measures ensuring that it’s as capable as possible both on the road and on track.

It’s expected that the new Mercedes-AMG GT Black Series will be revealed in full next week.