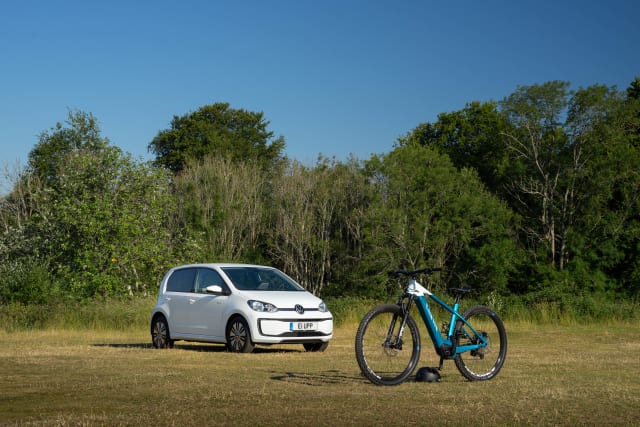 Electrification is having a huge impact on the way we get around. In cars, battery technology is helping vehicles to travel further and further while using plug-power alone while with bicycles, an on-board battery is allowing people to put their pedal power to more efficient use.

We’ve taken a look at two new additions to both camps – the Volkswagen e-Up! and the Canyon Grand Canyon:ON – to see just how battery technology is changing the way we move about.

How do the batteries compare?

Obviously, the batteries powering a car and bicycle are quite different – but it’s quite interesting to see how the outputs of each compare. The battery fitted to the Canyon – located in the downtube and accessed via some small bolts underneath the bike – has a 504 watt/hr battery and it gives an extra 250 watts of power and 70Nm of torque, which is quite a lot of power for a bicycle.

The e-Up!, meanwhile, uses a 32.3kWh battery linked to an electric motor. Total power output for the system is 80.5bhp, while there’s 210Nm of torque to play with. If you think about it, that’s not an awful lot more than the bike – but still a decent slug of pushing power for a car of this size.

Range is a subject which is intertwined with EVs. Particularly in the automotive sector, ranges have been building thick and fast with many exceeding the 300-mile mark. The e-Up!, however, sits at the lower end of the scale, with Volkswagen claiming up to 159 miles on a single charge. Charging it from zero to 80 per cent takes around an hour using a high-speed 40kW DC charger, or four hours with a wallbox. Using a three-pin will see that time rise to a not-inconsiderable 16 hours.

When it comes to the Canyon, the 504Wh battery claims a range of up to 100km – around 62 miles – which by far exceeds the average cycle route length. Of course, remember that the range can be extended by using more pedal-power. The range is by far at the top end of those currently available with e-MTBs.

If you’ve yet to try an electrically-assisted car or bicycle then we’d highly advise giving it a go. The instant slug of torque you get in an electric vehicle like the e-Up! means that acceleration is instant and feels far quicker than its 11.6-second 0-60mph sprint time would suggest. It’ll give a lot of cars a surprise away from the lights, that’s for sure.

Then there’s the Grand Canyon:ON. The way it charges (if you’ll excuse the pun) up hills is frankly astounding, with the electric motor providing huge amounts of pushing power. Even the steepest hills are no match for it, and with three modes to choose from – Eco, Trail and Boost – you can tailor the amount of assistance you get to the situation. It’ll do a top speed of 15mph too, but this is really about giving assistance uphill rather than outright speed on the flat.

Do the batteries add a lot of weight?

Of course, batteries add weight. They’re dense things, that’s for sure, and even as the technology has progressed and battery sizes have shrunk, they still add a reasonable amount of heft. The Canyon receives an extra 5.4kg from its battery and motor, with a total weight of 21.89kg, which is quite a bit more than the 11.95kg you’ll have to push along with Canyon’s standard Grand Canyon MTB. However, remember that with the electric motor on board you’re getting a lot of assistance and help – something which could be incredibly useful for someone just starting out on two wheels or needing a bit of help with the hills – which is something the regular bike just can’t offer.

It’s a similar story with the Volkswagen, too. While the standard Up! comes in at a svelte 926kg, the addition of an electric motor and batteries brings that total up to 1,160kg, which is a considerable increase.

But are they fun?

A lot of the time electric power isn’t seen as exciting, with the addition of batteries not adding to the experience of driving or riding. But here’s the kicker – it is exciting. The e-Up!, for example, is – in our opinion – just as exciting as Volkswagen’s GTI version with the instant power delivered by the batteries adding a childish level of excitement to the whole experience of driving. It quietly zips along, while the well-judged steering means it’s great in the bends too. Yes, you need to stop and charge it occasionally, but with close to 160 miles from a single charge you’ll be doing it less than you’d think.

And when you’re charging up a hill at speeds you’d think were only reserved for downwards descents, the Canyon proves that battery power is fun too. It works to only enhance the joy of being out and about on two wheels, while taking some of the strain away from riding up steep hills. As a gateway to the world of cycling, battery assistance makes a huge amount of sense; it helps you to not fear steep inclines, with the electric helping hand around to make sure that you enjoy climbing hills just as much as going back down them.

So should I make the switch?

Make no mistake – we love the traditional way of moving about. Big V8 engines and full suspension downhill bikes get us going and are properly exciting, but just because something uses electric power doesn’t mean it should be discounted off the bat.

In fact, Canyon’s e-MTB shows that electric assistance can only help to elevate the experience of cycling to a higher level, giving you the freedom to push harder and go further afield without feeling overwhelmed. Yes, there’s a weight penalty, but the gains far outweigh the drawbacks in this instance.

Then there’s the Volkswagen. The regular Up! is one of our firm favourites, but in this instance, we’d take the plug-in model over the standard combustion engine-powered version. Again, like the Canyon, electric power allows you to fully enjoy the experience without feeling any drawbacks. With a decent range, it’s useable on a daily basis too.

In short, the days of electric power feeling like the distant cousin to fun and excitement are over; plug power is here to stay and, as the technology progresses even further, we can only see things getting better from here.