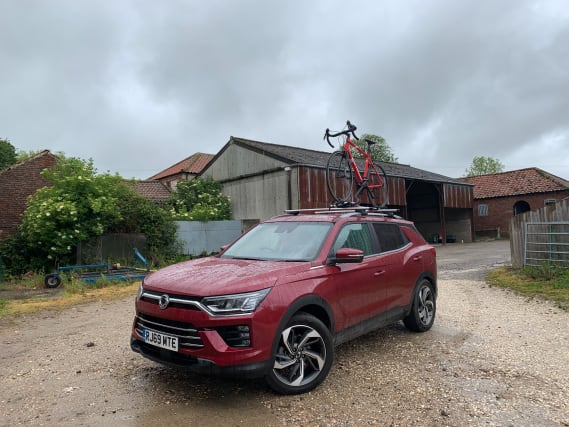 It’s safe to say ‘my’ long-term Korando has had a pretty easy start to its life.

First picked up in February, it spent a month bumbling largely around a town centre, before making a 300-mile slog up to Yorkshire, where it spent its life throughout lockdown.

But recently the Korando’s been thrown in at the deep end – as it’s had to help as part of a house move from one end of the country to the other. The ultimate test for a car’s practicality? I reckon so.

Thankfully the Korando has one of the largest boots in its sector – measuring 551 litres, which would certainly come in handy. It wasn’t just load-lugging, though, that was expected from our Korando, but also assistance, with RJ69MTE needed to try and kick some life into my own car (a 12-plate Seat Ibiza) that had been stuck at the opposite end of the country for three months.

So, armed with various jump leads, a massive power pack, me and Dad set off on our dual rescue mission and house move. It was at this point I’d forgotten just how poor the Korando is on fuel – averaging anywhere between 25 and 30mpg, even when unloaded. I think I’ve mentioned it in previous reports, but it’s the only test car I’ve ever had that can’t do the 280-mile trip from Gosport to Malton without having to stop for fuel.

Upon arriving in Gosport, I pulled straight up in front of my Ibiza thinking the jump leads would be needed. But miraculously, no. The Ibiza kicked into life straight away, so all was going well, or so I thought…

Next was to empty the flat I was living in pre-lockdown. It’s safe to say that choosing a furnished flat was one of the best decisions I’ve ever made in that respect – meaning that no removal vans were needed for the likes of sofas, etc, but just something Korando-sized for all my own belongings.

As I’m sure everyone can relate to, you never quite realise how much stuff you have until you have a clear out. So I was very grateful for the SsangYong’s large boot, and also its underfloor boot storage – meaning it was easy to separate things and still have that nice flat floor for loading everything in. The back seats were also brimmed, and even the passenger seat, too. While my bike could have gone on the roof, I decided for a 300-mile trek back up north, it may as well go in my Seat, which was empty.

So with the sat nav set, and (of course) another visit to the petrol pumps, off we set off back home. All was going swimmingly until my Ibiza decided to suddenly break down on the M1 – meaning an AA call out, which diagnosed an injector failure, and advised leaving the stricken Seat at a garage near Donington Park, a handy 114 miles from home.

So with my Ibiza abandoned at the side of a main road, and not wanting my bike entirely on show, it was time to make use of the roof bars, which ashamedly was the first time I’d been able to use them as lockdown put a stop to any cycle rides that didn’t start and end at home. It also meant moving everything from the front passenger seat so Dad could actually sit somewhere. I can confidently say that I’ve never driven a car so full of stuff in my life and as weighed down as well.

But to the Korando’s credit, it didn’t seem to have much of an effect on its performance, while I was seriously impressed with just how comfortable the seats are. Having spent 11 hours behind the wheel in one day, I got out and felt as if I’d only been in the car 30 minutes. It’s also refined at motorway speeds, and even with the bike on the roof, there was amazingly little wind noise. All this weight also didn’t seem to impact the fuel economy any more than usual – much to the appreciation of my wallet.

So having eventually arrived home – a full 15 hours after first setting off – the Korando had certainly proved just how practical and useful it can be. Had we been in a slightly smaller crossover in this class, I reckon it wouldn’t have physically had the room for all my luggage and items.

While I remain unconvinced by this petrol engine in the Korando, as it just feels too needlessly thirsty – something that’s particularly exposed on long journeys – its practicality and spaciousness just can’t be faulted. Does anyone else need help moving house?