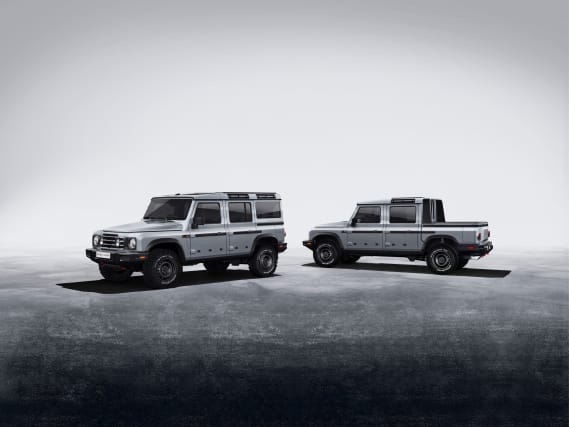 The Ineos Grenadier has finally broken cover, revealing the British-built off-roader designed as a homage to rugged 4x4s of the past.

The brainchild of Sir Jim Ratcliffe, the CEO of chemicals group Ineos, the Grenadier has been built on a completely new platform and will use engines from BMW.

It was conceived to fill what was identified as a gap in the market for a more utilitarian off-roader as traditionally off-road focused SUVs turned to the more lucrative family-focused market. As such, it has a simple boxy design that has clearly drawn inspiration from classic Land Rover Defender and Mercedes-Benz G-Wagen models.

Toby Ecuyer, head of design at Ineos Automotive, said: “The brief was simple. We set out to design a modern, functional and highly capable 4×4 vehicle with utility at its core.

“A design that is ‘easy-to-read’, with no ambiguity about the Grenadier’s role in life. There to do everything you need, and nothing you don’t. Nothing is for show. Modern engineering and production techniques ensure the Grenadier is highly capable, but we have been able to stay true to the essence of creating a utilitarian vehicle that will stand the test of time.”

Although this is just a design reveal, a few more specific details are known at this point. For example, it will be offered with a range of six-cylinder petrol and diesel BMW engines, will be sold as a five-door SUV first before being joined by a four-door pick-up truck later, and is being built in partnership with Austrian automotive manufacturing experts Magna Steyr.

Dirk Heilmann, Ineos Automotive’s CEO, said: “We are delighted to be able to share the design of the Grenadier so early in the process. Most manufacturers would hold back, but we are a new business, building a new brand, and we want to take people with us on this exciting journey.

“Showing the design now allows us to focus on the critical next phase of the vehicle’s development, testing its capability and durability. We have a very challenging programme ahead, as we put prototypes through their paces in all conditions, on the way to accumulating some 1.8 million test kilometres over the coming year.

“From today the covers are off. Testing ‘in plain sight’ without the need for camouflage wrapping, foam blocks or fake panels is an added benefit.”

Ineos says it is in the series development phase, testing prototype models ahead of a late 2021 launch date.

Thousands of cars put into storage due to pandemic