ABT gives Audi’s A6 Allroad a performance boost 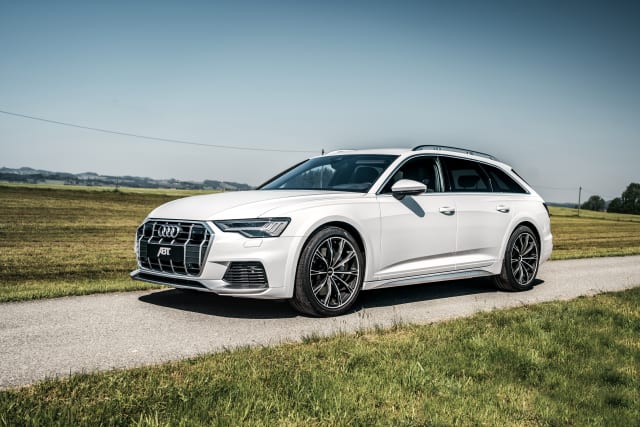 Performance tuner ABT has turned its attention to Audi’s latest A6 Allroad, bringing more power to the adventure-orientated model.

The Allroad pushes out 335bhp in standard form, while torque stands at 500Nm. However, thanks to ABT’s unique engine control system, the 55 TFSI petrol engine now gives out 402bhp and 550Nm of torque, representing considerable gains on the standard model’s performance.

It’s not just the petrol Allroad that has been given a tweak, either. The 55 TDI has also been given a boost, bringing 378bhp over the regular car’s 344bhp. Torque is bumped up too, rising from 700Nm to 760Nm. The entry-level diesel – badged 50 TDI – has been boosted from 281bhp to 325bhp.

ABT has lifted the overall look of the car too, with new alloy wheels available in either 20 or 21 inches. Inside, there are a variety of customisable options available such as a start-stop button finished in carbon-fibre. The gear stick can be finished in the lightweight material too.

The tuner will also install bespoke entrance lights that project the firm’s logo onto the ground at night when the doors are opened.

Prices for the ABT A6 Allroad are expected to be slightly higher than the regular car’s £52,983 starting price.