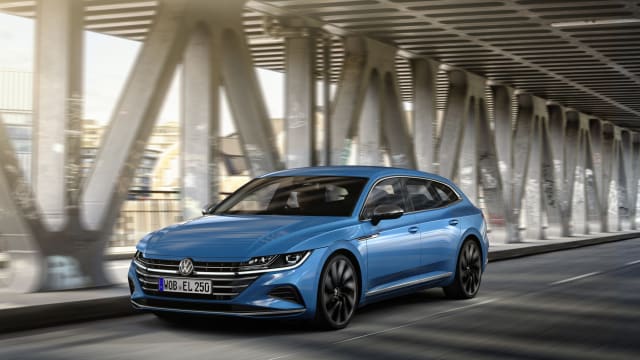 Volkswagen has unveiled its new Arteon Shooting Brake, which sits in the line-up of the revamped Arteon range.

The new estate-style vehicle sits alongside a regular hatchback variant, while a PHEV powertrain and range-topping ‘R’ model will be incorporated into the series of cars. The new Arteon is expected to go on sale in the UK this autumn.

But it’s that Shooting Brake variant that is making the most waves thanks to its dynamic styling and more practical layout, which is likely to be a big hit with those after an Arteon model with a little more space.

In fact, there’s 11mm more headroom up front in the Shooting Brake compared with the hatchback, while a 590-litre boot is slightly larger too – and it can be increased to a healthy 1,632 litres by folding the rear seats flat.

The Arteon has been given plenty of tweaks compared with the previous model, with LED headlights and a revised front grille giving it a distinctive look. When it comes to the inside, buyers will find a new touch-sensitive control system for the air conditioning system as well as a new multifunction steering wheel. All cars get a 10.25-inch digital instrument cluster, while the main infotainment system comes as standard in an eight-inch layout, but can be optionally increased to 9.2 inches.

A performance-orientated R version will sit at the top of the range, utilising a 2.0-litre turbocharged four-cylinder engine with 316bhp and 420Nm of torque, sending power to all four wheels. This engine will be available with both Shooting Brake and hatchback variants. These models also benefit from chassis tweaks, with lowered suspension and adaptive dampers helping to keep the Arteon flat and composed in the bends.

Buyers will also have the option of a PHEV powertrain that combines a 1.4-litre turbocharged four-cylinder petrol engine, electric motor and a battery back. Volkswagen claims that it’ll be able to travel up to 34 miles in electric-only mode.

These new powertrains stand alongside the pre-existing engines, with a range of 2.0-litre turbocharged engines available. A six-speed manual or seven-speed DSG automatic gearbox can be selected, too.