UK Drive: The Mazda CX-30 is a crossover for those that enjoy driving 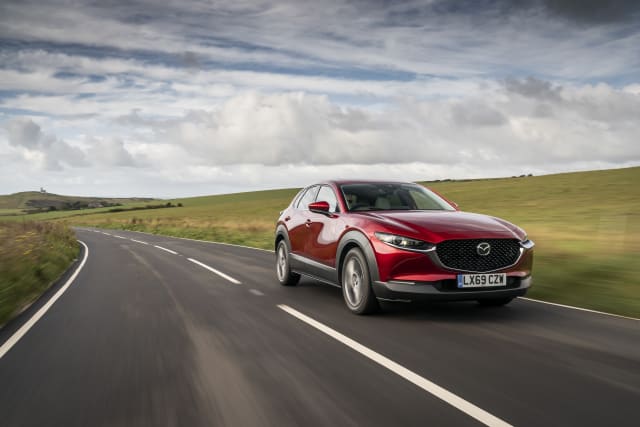 Like plenty of manufacturers, SUVs and crossovers are now integral to Mazda’s line-up. First with the CX-5 and then with the CX-3, this Japanese car maker has delivered some delightful models in this class – ones that look the part but also drive brilliantly. The latter is something plenty of manufacturers still struggle to deliver when it comes to high-riding models.

There’s also now a new kid on the block – the CX-30. It’s somewhat confusingly not called the ‘CX-4’ as that model already exists in China, but that’s what this model essentially is. Even more confusing is that Mazda has since discontinued the CX-3 in the UK – perhaps thinking there was just too much overlap between the two cars.

The new Mazda3 arrived last year and immediately impressed with its superb styling, high-quality interior and enjoyable drive. It’s certainly a great start for the CX-30, as it shares plenty of its DNA with that hatchback.

There’s lots going on – from its cool styling through to its standard-fit mild-hybrid technology and clever engine, which we’ll get onto later.

It all seems to be stacking in favour of the CX-30, but how does it work in practise?

It’s a sign of the times that you won’t find any diesel engines under the bonnet of the CX-30, but rather a choice of one of two 2.0-litre petrol engines instead.

An entry-level 122bhp ‘Skyactiv-G’ is available, but our test car uses the new Skyactiv-X petrol unit. It’s an engine Mazda is making a big song and dance about – and for good reason – as it’s the first of its kind to feature both spark and ignition compression – essentially aiming to create the best of both worlds with a petrol and diesel.

It produces 178bhp and 224Nm of torque, and means it can accelerate to 60mph in 8.8 seconds and hit a top speed of 127mph. It’s available with a manual or automatic gearbox, and front- or all-wheel-drive – our test car delivering power to all four wheels via a six-speed manual gearbox.

If you value driving enjoyment and want a crossover, the best advice we’d normally give is to tell you to go for a regular hatchback instead.

But with the CX-30, that’s not needed, as this crossover feels nearly every bit as agile as the Mazda3 it’s based on. Everything is perfectly well-judged, well-weighted and it’s a sheer joy to drive – whether you’re wanting to push on down a B-road or cruise along the motorway.

The engine itself is a bit underwhelming, though. As clever as it may be, it’s quite sluggish unless you’re really revving it. That said, go for the manual option and this gearbox is such a joy to use that you won’t mind changing gear more than usual to make the most of its performance.

For the best efficiency, it’s best swerving the all-wheel-drive version, as it knocks the CO2 emissions from 133g/km up to 146g/km and reduces the fuel economy from 47.9mpg to 43.5mpg.

In our eyes at least, Mazda car designs are some of the best around at the minute.

With slim LED headlights that run perfectly into the grille to the sharp yet simple lines, this firm’s vehicles usually look great from every angle. While Mazda’s managed to carry over plenty of cues from the stunning Mazda3, it’s also brought with it a colossal dose of plastic cladding – you know, that thing a car has to have to for it to be a bit ‘crossover’.

There’s nothing wrong with this normally, but we can’t help but feel the amount of black plastic stuck to the side of the CX-30 is just a bit over the top, and that it would look much sleeker with a bit less. But again, you might love that about it.

Mazda interiors have really gone up a notch in recent years, and definitely feel far more premium than they do mainstream. In terms of layout and quality, the CX-30 is an example of how to do a cabin just right. Its high-quality materials feel as if they could rival anything German in this class, while it features a simplistic fuss-free control layout, but still retains physical buttons for the climate control – a touch we appreciate.

The infotainment system is also one of the best around, and is controlled using a rotary dial at your side, rather than a fiddly touchscreen. Given the screen sits right at the top of the dash, you don’t have to take your eyes off the road to look at it, either.

Just be aware that these cool looks mean the CX-30 isn’t especially spacious or versatile. Its 430-litre boot isn’t as large as plenty of its rivals, and the sloping roofline might mean taller adults struggle to get comfortable in the back.

There will be few grumbles when it comes to standard kit on the CX-30, with entry-level SE-L models coming with plenty of equipment – LED headlights, adaptive cruise control, blind spot monitoring and rear parking sensors being a few highlights.

Our test car was a flagship GT Sport Tech model and in this grade it’s brimmed with kit such as a head-up display, panoramic cameras and black leather upholstery.

As for pricing, models start at £22,940 for the SE-L model, and it’s certainly worth making the jump to a Skyactiv-X model, which costs from £24,440 – or according to Mazda’s finance calculator, just £3 extra per month, which makes it a no-brainer. A mid-spec Sport Lux model seems like the best value, though – bringing sportier looks and larger 18-inch alloys, and avoiding the tiny 16-inch rims on base-spec models.

Save yourself £4,000 by going with a manual front-wheel-drive car, too – unless you really need that extra all-wheel-drive ability and an automatic gearbox.

It seems like Mazda can do no wrong in recent years, and this CX-30 is yet another superb car to come from the Japanese manufacturer. If your priorities in a car are what it’s like inside and the way it drives, the CX-30 should be right at the top of your shortlist, as it blows rivals out of the park in these areas.

While its looks won’t suit everyone and Mazda clearly didn’t make spaciousness its prime concern, the CX-30 is a great all-round package that’s a worthy addition to this already-congested segment.