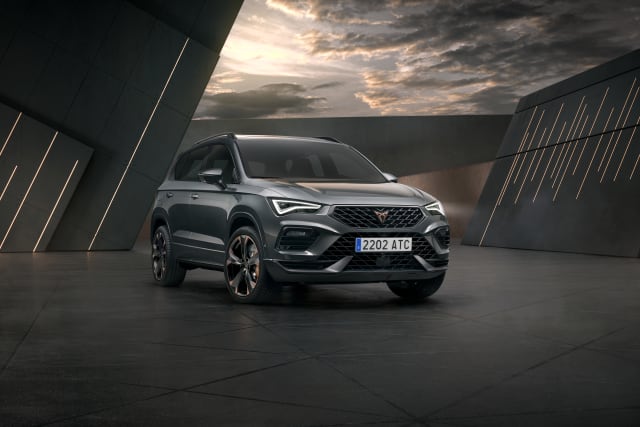 The new Cupra Ateca has been revealed, introducing new technology and styling tweaks to bring it in line with the freshly updated Seat version.

The Spanish manufacturer recently revealed a mid-life facelift for the Ateca, and now its performance arm has shown how these updates apply to its version.

Chief among the changes is a new-look exterior that looks similar to the outgoing model but with sharper, more sporty lines. There’s also full LED headlights, fog lights and rear lights, dark trim pieces and a quad-exit exhaust.

The standard alloy wheels are 19-inch units in black or silver, with a copper choice available at extra cost. Seventeen-inch brake callipers are fitted as standard, but 18-inch Brembo performance brakes are available as an upgrade.

Much like the outgoing car, the new Cupra Ateca gets Alcantara-clad bucket seats, while the steering wheel gets a microsuede trim. The dashboard and door panels are both dark aluminium with copper stitching.

The instrument cluster is a 10.25-inch all-digital system, while infotainment comes from a 9.2-inch touchscreen, which includes a new voice recognition technology. There are also four USB-C ports in the cabin for fast smartphone connection.

Performance comes from a 2.0-litre turbocharged petrol engine making 296bhp and 400Nm of torque, with all-wheel-drive contributing to a sub-five-second 0-60mph time, about three-tenths quicker than before.