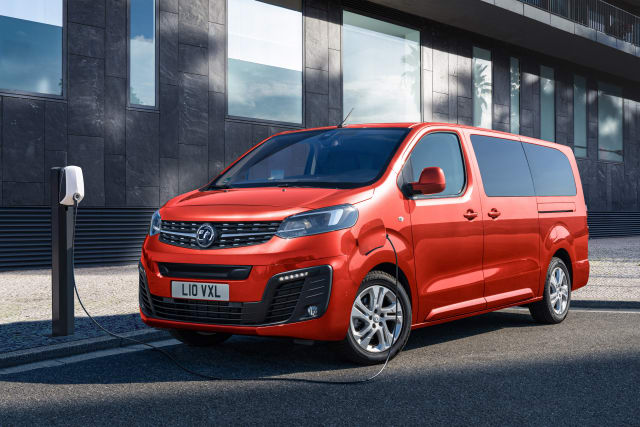 Vauxhall has bolstered its range of electric vehicles with the reveal of the new Vivaro-e Life.

Positioned as the flagship in the Vivaro Life range, the Vivaro-e has space for up to nine passengers and is available in two lengths.

Yet the most crucial aspect of the vehicle is its electric powertrain; a 100kW motor with 260Nm of torque drives the Vivaro-e, and Vauxhall claims that it’ll return up to 143 miles between charges.

The 50kWh battery which stores the energy has been located underneath the load compartment, which makes no impact on luggage volume while helping to keep the vehicle’s overall centre of gravity low. A regenerative braking system has been incorporated into the Vivaro-e’s design too, helping to recuperate energy produced during braking or deceleration.

The battery is also covered by an eight-year, 100,000-mile warranty too.

When using a rapid 100kW DC charger the Vivaro-e can be taken from 0 to 80 per cent in around 30 minutes. The van comes fitted with a 7.4kW on-board charger as standard, though a more powerful 11kW three-phase charger can be included as an optional extra.

A special ‘charge my car’ function included in Groupe PSA’s ‘Free2Move services’ app gives access to more than 140,000 charging points across Europe, while the app itself can even make a preselection of which charging station to use based on the distance to the location, the charging speed and the current price of the public charging options around.

Vauxhall hasn’t missed the Vivaro-e’s need to be practical, either, with ‘Large’ sizes offering up to 4,500 litres of loading space. Five-, six-, seven- or eight-seater configurations are available, while a high-specification ‘Lounge’ trim brings electric heated front seats and extra cushioning for the four movable leather seats behind. A trailer hitch option allows the Vivaro-e to tow up to 1,000kg, too.

A variety of driver assistance systems have been included with the Vivaro-e, including emergency braking, semi-adaptive cruise control and lane-keep assist. A large central touchscreen includes Apple CarPlay and Android Auto smartphone integrations systems, too.

Order books for the Vivaro-e Life will open this summer and Vauxhall expects first deliveries ‘during the course of the year’.