First Drive: The Ford Kuga PHEV is a handsome SUV that has its downsides 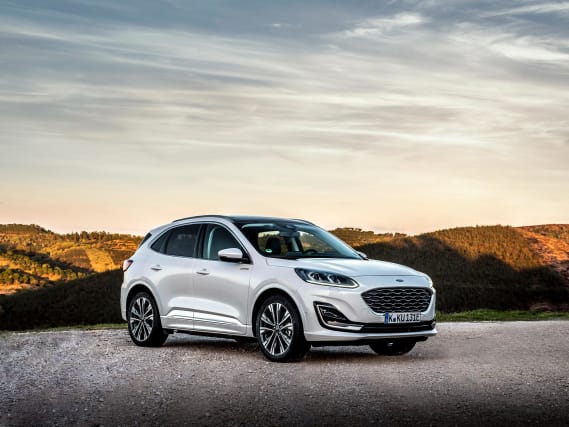 Following a slow start, the Kuga SUV has been one of Ford’s best-selling models for a while now, with the industry’s love of big, practical SUVs mixing with the brand’s blue-collar appeal to make it a definite sales hit.

The latest generation is bigger than before with a whole new styling direction, and perhaps most importantly, a commitment to electrified powertrains from a brand that has lagged somewhat behind rivals in this department. The plug-in hybrid variant we’re testing here is a pretty big deal, then, thanks to lower running costs from a car that buyers already seem to love.

The big news is the plug-in hybrid powertrain, but we’ll go into more detail on that in the next segment. Instead, we’ll first look at the fact that the new Kuga has gone down a completely different styling direction than its predecessor, taking cues from the Focus – in fact from some angles it’s easy to mistake it for Ford’s hatchback model.

Elsewhere, the interior has been brought up a notch, and there are new technologies both in the cabin and under the skin to improve the driving experience such as driver safety and assistance systems.

It sits on Ford’s new C2 vehicle architecture, which the company says has resulted in the new Kuga being lighter than its predecessor, more aerodynamic for better fuel economy, and with better crash safety.

The hybrid powertrain uses a 2.5-litre petrol engine combined with an electric motor and generator that are powered by a 14.4kWh battery. This provides a decent, usable electric-only range of 35 miles, which means you could get away with rarely even using the petrol engine.

It makes a total of 222bhp with a top speed of 125mph. Fuel economy figures are pretty wild at 202mpg, but only if you’re regularly topping up the batteries and only taking short trips is that a possibility, though we saw economy figures in the 60s during mixed driving. CO2 emissions are low, at just 32g/km.

It’s a rather hit and miss powertrain to use. At lower speeds where the electric motor is doing most of the work it’s brilliant, providing smooth but punchy response and silent operation. At motorway speeds with the engine on it’s still quiet enough, and even when the engine kicks in around town it’s not too intrusive. However, the CVT gearbox means that accelerating harder using the petrol engine is unrewarding with an unappealing soundtrack to boot.

There’s a lot to like about the Kuga, but the way it drives is its weak point. First, the positives. As we’ve come to expect from Ford products, it handles well, doing a good job of restraining its heft in corners, while also not being intimidating to drive around town thanks to the smooth and responsive electric motor.

However, there are quite a few negative aspects to the driving experience, such as the bizarre, rubbery self-centring of the steering wheel as you turn – something common to Fords but most prominent in the Kuga. Meanwhile, the brake pedal gives little feedback but is very sensitive, which makes slowing down smoothly difficult. We’re also not convinced by the ride, with it feeling very heavy over bumps.

While previous generations of the Kuga wore chunky “I’m an SUV” styling, the latest model ditches this in favour of a sleeker appearance. From a distance it looks like a family hatchback rather than an SUV, meaning it stands out less than rivals on the road but still offers the high driving position and practicality that has made this segment so popular.

Aside from the softer styling, some of this non-SUV look is achieved by having a more reclined windscreen and lower roof angle, which hides its height. Despite this appearance, it’s actually bigger than the outgoing model…

The cabin is one of the Kuga’s trump cards, because it feels exceptionally well made. Our top-spec Vignale model also comes incredibly well-specified, with high-quality materials used throughout and luxury extras such as a heated steering wheel and leather-wrapped instrument panel helping to improve the overall feel.

It’s very spacious too, making it ideal for families. Rear seat passengers, big and small, will have plenty of leg room, while boot space is decent at 411 litres, even if it is less spacious than non-hybrid versions.

If you’re not looking to stretch to the price of a top-spec model – or just don’t fancy putting premium leather at the mercy of the kids – the Kuga’s interior has all the practicality and build quality you could need in a family car, regardless of trim level.

There are five trim levels available for the Kuga: Zetec, Titanium, ST-Line, ST-Line X and Vignale. However, if it’s this plug-in hybrid powertrain you’re after, that excludes Zetec.

Traditionally, Ford’s Vignale trim levels have felt like an unnecessary expense over less expensive but still generously equipped trims. However, commanding only a few grand more than the ST-Line trims, the Vignale PHEV feels like good value for money, especially if you’re more focused on comfort than sporty looks.

The Ford Kuga PHEV is so close to being great. Its styling is sleek and unimposing, the interior is well made and spacious, and the electrified portion of its powertrain makes for a relaxing, effortless driving experience. What’s more, keep the batteries topped up and that useful electric range means running costs should be very low indeed.

However, it’s hard to get away from the fact it’s a bit of a letdown from behind the wheel. The inconsistent control weights make smooth driving a chore and detract from what should be a brilliant family SUV. A test drive is highly recommended, because if you can live with those negatives you’ve got yourself a handsome, practical SUV.