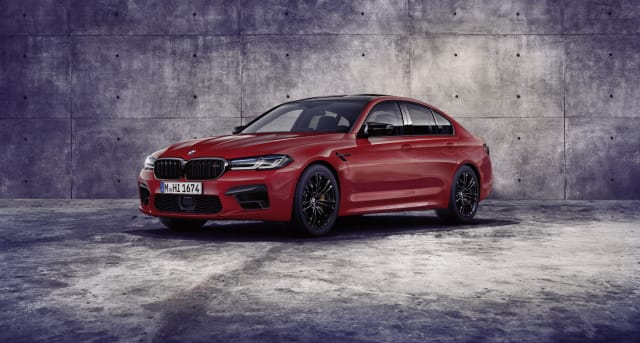 BMW has given its M5 Competition a bit of nip and tuck following updates to its regular 5 Series model.

The Audi RS 6 and Mercedes-AMG E63S rival benefits from a new-look grille and updated headlight design, as well as a revised front bumper and splitter. The front kidney grille – a hallmark BMW design – have also been tweaked to sharpen its design.

Edits have been made around the back of the car too with newly designed LED taillights and a new twin-exit exhaust system helping to breathe new life into the M5’s design. Three new metallic paint colours – Tanzanite Blue, Alvit Grey and Aventurine Red – are available too.

The M5’s 4.4-litre turbocharged V8 engine remains unchanged, as do its output figures of 616bhp and 750Nm of torque. Power is sent to all four wheels via an eight-speed automatic gearbox, while drive can be locked off with 100 per cent of power sent to the rear wheels.

The M5’s dampers have been updated using a system already featured on the M8 Competition. The engine mounts have also been stiffened and larger brakes have been fitted too. A new ‘M Mode’ driver profile allows owners to instantly switch settings from ‘Road’ to ‘Sport’ as well.

Performance remains unaffected, which means the M5 Competition still cracks the 0-60mph time in three seconds and will go on to do 155mph flat out, or 188mph with the optional M Driver’s package fitted.

Inside, the new M5 Competition benefits from updates applied to the facelifted 5 Series including a larger 12.3-inch digital instrument cluster and an enlarged screen, too. A new optional Technology Pack adds rear seat heating and a heated steering wheel – among other features – while an Ultimate Pack brings a carbon fibre engine cover.

Set to arrive in showrooms later this year, the new M5 Competition is priced from £98,095.