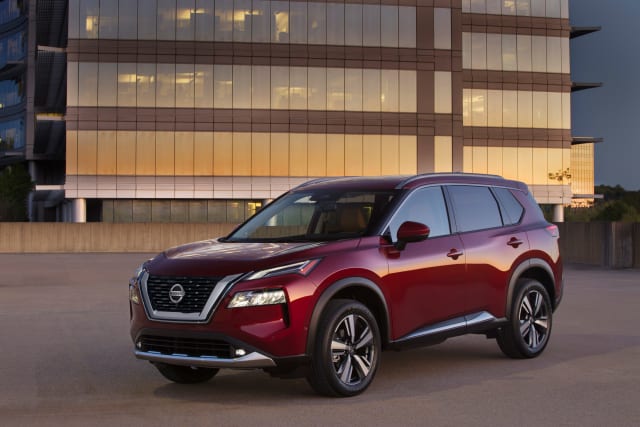 Nissan has revealed its upcoming X-Trail through the release of its US-only Rogue model.

The Rogue, though destined for solely American markets, will become the next-generation X-Trail when it arrives in Europe next year.

Though specifications and engines are likely to change when the X-Trail does hit the UK, the new Rogue gives a clear indication as to what the upcoming SUV will look like.

The front end, for instance, takes inspiration from the latest Juke with a distinctive grille at the front framed by sharp LED headlights. A high waistline to the car gives it more presence too, while black plastic wheel arch trim pieces help to give it a chunky, go-anywhere look.

Yet despite the Rogue’s heftier appearance, it’s actually 39mm shorter than the outgoing car as well as being slightly lower, too. The rear of the car benefits from large, model-specific badging, which will likely be carried over to the X-Trail too.

Inside, there’s a new digital driver display with configurable dials, while a large central infotainment screen dominates the central part of the cabin. The Rogue has only been offered in a five-seat configuration for now, though the current X-Trail has been available as a seven-seater – so this might change when the car arrives in the UK.

The upcoming X-Trail will likely incorporate Nissan’s latest ProPilot system with semi-autonomous driving functions, with updates allowing it to use satellite navigation information to automatically brake the car for changes in road layout.

A firm reveal date for the X-Trail has yet to be announced, though Nissan has already stated that it is moving production of the model from its current home in Sunderland to the firm’s main plant in Kyushu, Japan.