Britain will introduce a distinctive number plate for electric cars later this year to promote cleaner vehicles, the transport secretary said on Tuesday, as the country targets net-zero greenhouse gas emissions by 2050.

The new plates, which will carry a bright green stripe down one side, will help authorities identify electric vehicles, making it easier for their drivers to access incentives such as cheaper parking and exemptions from emissions charges.

Transport Secretary Grant Shapps said the initiative would raise awareness of cleaner vehicles and show Britons "a greener transport future is within our grasp."

"A green recovery is key to helping us achieve our net-zero carbon commitments while also promoting economic growth," he said in a statement. 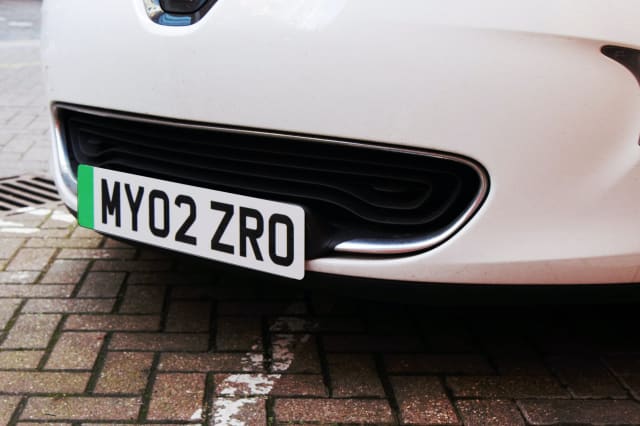 Tuesday's announcement follows a public consultation in October as part of the government's 1.5 billion pound "Road to Zero" strategy to slash emissions from road transport.

Only zero-emission vehicles will be eligible to receive the new registration plates.

"We'd like to see more direct financial incentives to bring the cost of EVs (electric vehicles) down, as drivers tell us it's the cost that's one of the biggest barriers to them opting for an EV," RAC spokesman Rod Dennis said.

The Telegraph reported last week that Prime Minister Boris Johnson was considering giving drivers up to 6,000 pounds to swap their diesel and petrol cars for electric vehicles.

Edmund King, president of British motoring association AA Plc, said the distinctive license plates could instill a sense of pride among drivers, adding that more than a third of AA members backed the initiative.

"Having a green flash on the number plate may become a badge of honour for some drivers," he said in a statement. ($1 = 0.7909 pounds) (Reporting by Amber Milne; Editing by Helen Popper. Please credit the Thomson Reuters Foundation, the charitable arm of Thomson Reuters, that covers the lives of people around the world who struggle to live freely or fairly.