What happened at the first ever Virtual 24 Hours of Le Mans? 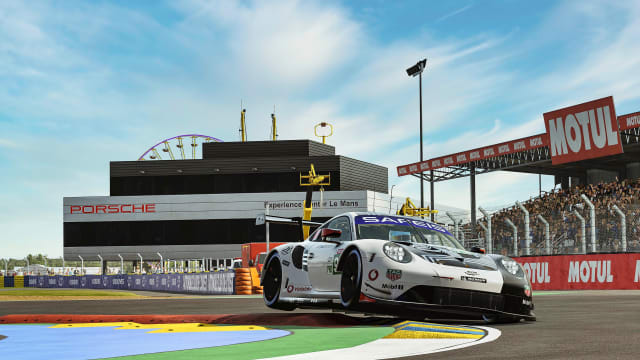 While most corners of the economy are counting the cost of the coronavirus pandemic, one segment has seen significant growth – online motorsport.

With race series around the world being postponed for more than three months, motorsport fans and drivers turned to the virtual world to get their competitive fix.

Following the huge surge in popularity of online racing, the organisers of the 24 Hours of Le Mans race – postponed until 19-20 September – decided to host an online equivalent on the race’s originally planned date using the rFactor 2 game.

Here’s everything you need to know about a historic weekend for sim racing – the winners, losers and drama in between.

Current Formula 1 stars Charles Leclerc, Lando Norris, Max Verstappen, Antonio Giovinazzi and Pierre Gasly were some of the biggest names to take part, but with each team needing a minimum of two professional drivers, the event drew some big names from world motorsport.

Most teams were made up of two professional drivers and two sim racers. These included big names from the virtual world such as Joshua Rogers and James Baldwin, as well as the popular YouTube star Jimmy Broadbent, who hit 500,000 subscribers during the race with less than an hour of his birthday remaining.

One of the big questions for sim racing aficionados was how rFactor 2 would hold up under the microscope during a 24 hour race. It was a big moment for the game, which has been overshadowed by competitor iRacing during lockdown.

Matters weren’t helped by an early red flag situation caused by Le Mans’ race control, who were overseeing a virtual race for the first time.

Motorsport legend Fernando Alonso had caused a crash with another car on his final lap before needing to refuel. Race control decided to hand him a ‘drive through’ penalty, which the driver can choose to ignore in their next pit stop and take at another time. However, the penalty was handed out as Alonso entered the pits, so he didn’t have time to cancel it. The game required him to drive through the pits and not stop to refuel, and he didn’t have enough fuel left to complete another lap, putting his team out of the race.

The organisers acknowledged their mistake and stopped the race so they could reload it and reinstate the FA/RB Allinsports team.

The next morning, another red flag was thrown and the server was reset because drivers loading into the game to take over driving duties could not select their car.

While rFactor 2 held up well for the most part, its owners will have been gutted to see that the only major potential bug outside of the aforementioned server issues ended the race for arguably the most high profile team taking part.

Team Redline featured F1 drivers Max Verstappen and Lando Norris, who have gained a reputation as two of the highest profile sim racers in the world.

With Verstappen at the wheel, the car crashed heavily when the Dutchman lost connection, and when the same thing happened to sim racer Atze Kerkhof during the night the car was retired.

Like Alonso’s team earlier in the race, they were reinstated following the next morning’s red flag incident, but were too many laps behind to mount any sort of meaningful challenge.

Despite their challenges in Formula 1, Williams has emerged as one of the frontrunners of the esports scene. They entered three teams into the Virtual 24 Hours of Le Mans in collaboration with motorsport team Rebellion Racing.

The GTE class was won by one of four Porsche eSports Team entries. The German car maker has invested heavily in esports recently, and its newly created online motorsport team dominated the GTE class. The number 93 car driven by Nick Tandy, Ayhancan Guven, Joshua Rogers and Tommy Ostgaard secured pole position in qualifying before going on to win the race.

British driver Tandy became the first person to have won both the real and virtual 24 Hours of Le Mans.