ABT turns up the performance on Audi’s S8 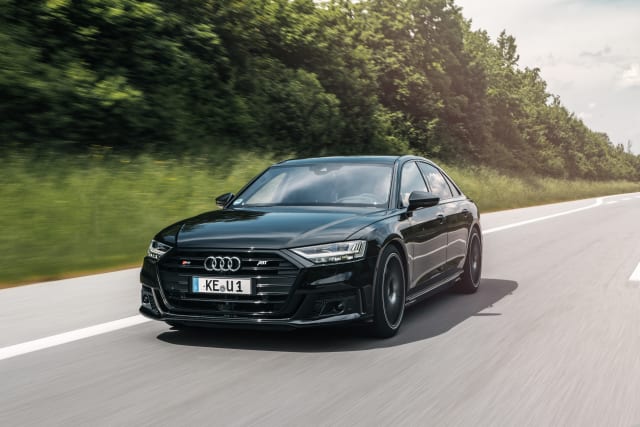 German tuner ABT has turned its attention to Audi’s S8 performance saloon, following on from a series of other high-powered models.

Thanks to a power upgrade from ABT, the S8 – which pushes out 563bhp and 800Nm of torque as standard – now produces a heady 690bhp, while torque has been boosted to 880Nm. It allows the 2.3-tonne saloon to go from 0-60mph in just over three seconds, while flat-out it’ll do 168mph.

It means that the 5.18-metre saloon can out-perform a standard Porsche 911 in a straight line.

ABT has also equipped the S8 with ceramic brakes to aid with bringing the saloon to a stop, though the tuner has decided to leave the car’s standard air suspension as it is, praising that it is already ‘meticulously designed’. It’s capable of tilting the chassis up to three degrees to help with cornering, while a forward-facing camera monitors the next 15 metres so it can adapt to any imperfections in the road ahead.

The standard S8’s understated looks have remained, though ABT has fitted a carbon fibre rear spoiler and 21-inch alloy wheels in one of two different designs. The first, called GR, features a diamond-machined outline and black finish while the second, named GR, receives a glossy black finish.

ABT has yet to announce any pricing, but expect it to far exceed the £97,140 required for a standard Audi S8.