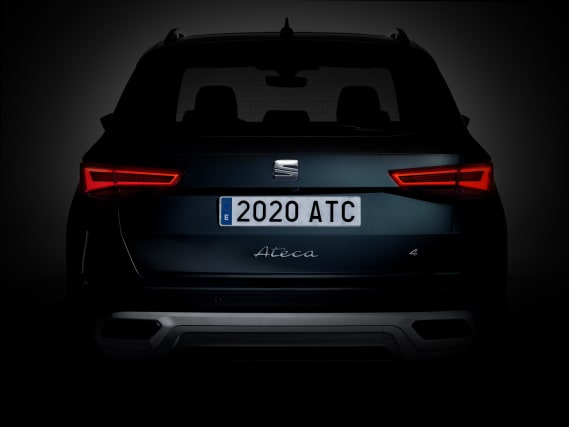 Seat has given a glimpse of its updated Ateca ahead of the SUV’s reveal next week.

The Ateca has proved to be a sales success for the Spanish firm, with more than 300,000 units sold globally since its introduction in 2016 – 35,000 of those having been in the UK.

Now, Seat is updating the Ateca to further its appeal, with the full car set to be revealed on June 15.

The new photo revealed today details the rear of the car, which now sports model-specific badging, mirroring that applied to the latest Seat Leon. The rear lights appear to have been redesigned too, while the ‘4’ badging shows that an all-wheel-drive version remains in the Ateca’s line-up.

The bottom of the car features an aluminium-style diffuser, which helps to brighten up the look of the Ateca from the back.

Seat says that the Ateca will offer a ‘fully connected user experience’ while debuting new safety features and a range of efficient engines. It’s likely that this latest Ateca will use many of the same features shown in the latest Leon, including a 10-inch infotainment screen and a 10.25-inch digital instrument display.

There’s no word on whether this latest Ateca will spawn a new Cupra Ateca version – developed by Seat’s performance arm – though it’s likely that an updated version of the faster Cupra is in the works.

BMW M4 ends up underwater after crashing into marina

First Drive: The Volkswagen T-Roc Cabriolet is a great alternative to the drop-top norm