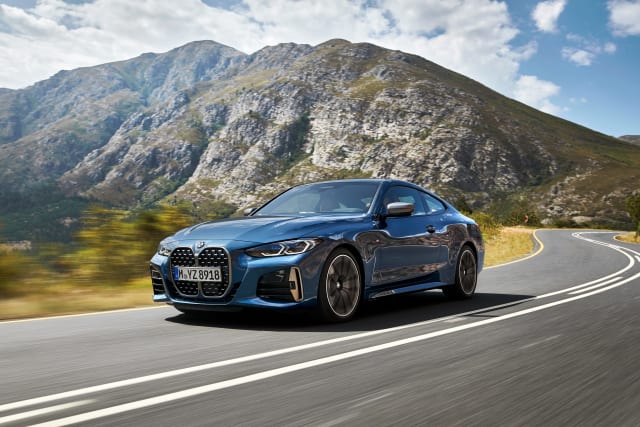 BMW has revealed its latest-generation 4 Series, debuting a fresh new design ahead of its market launch in October.

The two-door version of the current-generation 3 Series, the 4 Series arrives with an eye-catching look which incorporates a huge new front grille. A modern interpretation of the classic BMW kidney grille, the feature is one of the most noticeable aspects of the 4 Series’ design.

Slim LED headlights sit at the front of the car, while at the rear the lights have been designed into L-shaped bars.

All diesel engines, as well as the six-cylinder petrol which currently tops the range, benefit from mild-hybrid technology that uses a 48-volt starter-generator to aid with efficiency while improving engine response. All cars come with an eight-speed automatic transmission as standard too.

The range is kicked off by the 2.0-litre petrol-powered 420i and is followed by the 430i, which uses the same engine but with power increased from 181bhp to 245bhp. The range is topped by the M440i xDrive Coupe, which uses a 3.0-litre straight-six engine with 369bhp.

From launch, the single diesel available will sit in the 420d xDrive Coupe, with the four-cylinder unit producing 188bhp and 400Nm of torque.

To give the 4 Series a sportier feel, BMW has given it a much lower centre of gravity than the 3 Series saloon – 21 millimetres, in fact – while the rear track is 23 millimetres wider than the four-door upon which it is based.

The suspension features tuning bespoke to the 4 Series, while M Sport suspension remains an optional extra for those who want a firmer ride. Electronically-controlled dampers can be fitted at extra cost, too.

Inside, there’s a 10.25-inch central infotainment screen, while a 12.3-inch instrument cluster can be added as an optional extra. BMW has also included acoustic glass in the windscreen to create a more hushed cabin, while the glass roof has been extended by 24 millimetres over the old car to help create a lighter interior.