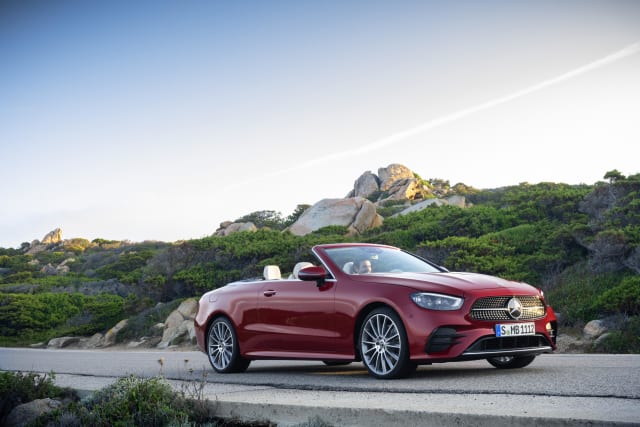 Mercedes-Benz has given its E-Class Coupe and Cabriolet models a mid-life refresh, sharpening the looks of the pair while adding more efficient powertrains.

Both cars will go on sale in June, with first deliveries expected to arrive in the early autumn.

The pair get a new set of LED headlights which are sleeker in design than those fitted to the previous version, while a new-look grille completes the refresh of the front. Around the back, there are new LED taillamps, too.

Though the interior of the cars remain largely the same as before, the most notable addition is a new touch-sensitive steering wheel. The system also allows drivers to keep the car in semi-autonomous mode simply by having a hand on the wheel – no steering inputs are required from the driver to allow it to stay in this mode.

Mercedes’ latest MBUX infotainment system has been introduced too, linking two screens – either 10.25 inches or 12.3 inches across – together, giving the impression of one large, widescreen display.

A new security feature called Urban Guard has been fitted as well. Linked to the owner’s Mercedes Me smartphone app, the system can alert the driver if the car has been bumped or broken into.

Underneath the bonnet, there’s the choice of several turbocharged four and six-cylinder petrol and diesel engines, with Merc’s 48-volt mild-hybrid system incorporated into all of the four-cylinder diesel options. All cars in the line-up use a nine-speed automatic gearbox, while both rear- and all-wheel-drive variants are available.

At the top of the Coupe’s range sits the Mercedes-AMG E53 4MATIC, which uses a 3.0-litre turbocharged petrol engine with mild-hybrid technology. Pushing out 429bhp and 520Nm of torque, it’ll reach 60mph from a dead stop in just over four seconds and hit 168mph flat-out. This powertrain is available with both Coupe and Cabriolet models.