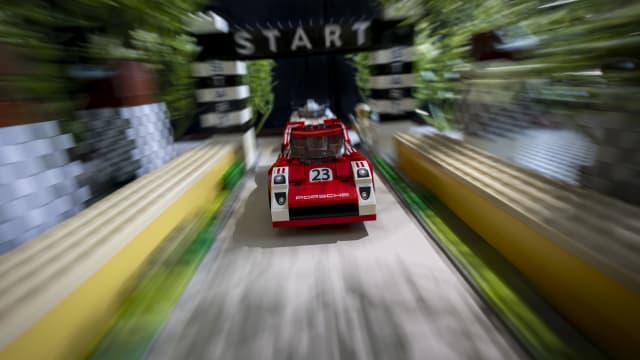 With the world on lockdown, work has dried up for many photographers who usually make a living travelling to locations and shooting events that simply aren’t happening anymore.

Many have found ways to fuel their creativity at home, though. Dominic Fraser is one such man, who spotted his children’s Lego and decided to shoot cars as if they were the real thing.

It’s proved a huge hit on Instagram, with many of the photos receiving more than 1,000 likes.

Fraser explains: “I’ve got a house full of cameras that weren’t doing anything and I found it incredibly frustrating because all I wanted to do was create something.

“Rather than doing nothing, I decided to use Lego’s Speed Champions models to try to recreate some of my favourite images from motoring history. I started with Audi and the quattro because we had that particular Lego in the house, but then I decided to model a series of Porsche images because the cars and the pictures are so iconic.”

Fraser says his love of Porsche began in 1991, when he was shooting Porsche ambassador and motorsport legend Walter Röhrl. “We were doing a shoot at the Motorsport Arena Oschersleben and we needed some in-car shots of the 964 race car. Walter was more than happy to drive me around, and the memories of the speed and the noise have never left me. Needless to say, I was holding on with great difficulty! The man is a legend,” the Brit explains.

The shots actually proved more complex than his real-world shoots, because he had to conceptualise every shot and think about the details. For example, he had to bring the crowd on the far side of the ‘Porsche in the pits’ shot closer to the car, because in the real world your brain fills in the gaps, knowing there must be a track behind the car. But in the Lego world, there’s no track, so you need to play with distances and focal lengths to make it more realistic.

Meanwhile, the shot of the 917 at Goodwood required real-life technical skills applied in miniature. The tracking shot was achieved by mounting the camera to a toy car and towing the subject behind to keep it the same speed. Using a slow shutter speed blurred the scenery but kept the Lego Porsche in focus, while editing software was used to remove the rope from the final shot.

For more examples of Duncan’s Lego photography, as well as his real-world shots, you can find him on Instagram with the username @_fraser73.