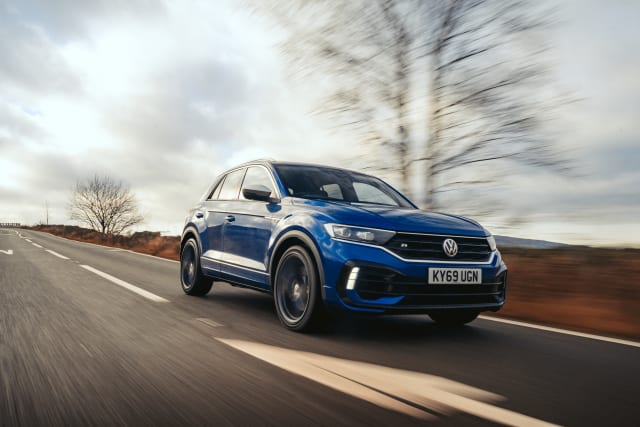 In the ever-expanding world of crossovers, there’s an emerging performance segment. The Volkswagen T-Cross R – which we’re driving today – is one of the latest entries into the class, following on from several other VW Group products like the Audi SQ2 and Cupra Ateca.

It’s a logical step, in fairness. Volkswagen has shoehorned the punchy 2.0-litre turbo engine from its accomplished Golf R into a jacked-up crossover, giving a bang-on-trend compact SUV a new appeal to performance-minded drivers. But is it any good? Let’s take a look.

On the face of it, the R looks remarkably similar to the standard T-Roc – and that’s likely to appeal to buyers. Much like the Golf R, the T-Roc doesn’t scream about its performance credentials, despite packing some serious firepower.

But unlike the Golf, the T-Roc is much higher, which will likely make it appeal to families who want something that’s easy to get children in and out of. It might not be a huge amount more practical than the Golf R, but as we’ve seen recently, the crossover is a winning formula – so there’s no reason why people won’t saunter past the regular hatch in favour of the higher-riding T-Roc.

As we already mentioned, the T-Roc arrives with some genuine performance, and far more than you’d expect from this car. A 2.0-litre turbocharged petrol engine produces 296bhp and 400Nm of torque, which is enough to send the T-Roc R from 0 to 60mph in just 4.5 seconds thanks to a launch control system.

All four wheels are driven here, too, and power is sent through a seven-speed DSG automatic gearbox. When it comes to efficiency the T-Roc R is about on-par for the segment; Volkswagen claims 32.5mpg combined and emissions of 176g/km. Drive it hard and that MPG figure will dwindle, mind.

Given that the T-Roc R has a higher ride height and therefore a loftier centre of gravity, you could be fooled into thinking that it’d be all wallowy and soft when pushing on. But that simply isn’t the case. In fact, Volkswagen has placed the seats far lower than you’d think, so immediately it’s apparent that the T-Roc R is geared towards keener drivers.

And it’s that seating position which helps to get a better connection with the car. The engine is a cracker; torquey and solid it pulls strongly throughout the rev range. We’d like a little more exhaust noise, in honesty, but for many it’ll be characterful enough.

Our car came on optional adjustable dampers too – Volkswagen calls it Dynamic Chassis Control – and in comfort mode, the T-Roc R rides impressively well, despite sitting on 19-inch wheels. Sport and Race modes firm it up too much for the UK’s roads, in our opinion, but it does help to give the car a little more reinforcement when cornering at higher speeds. At £695 it’s a reasonably pricey option, but one we’d thoroughly recommend adding.

In typically understated ‘R’ style, there’s not a lot to highlight the T-Roc’s performance. Yes, the quad exhaust pipes around the back, which are de rigeur on Volkswagen models do shout ‘look at me’ a bit, other than that it’s a rather quiet effect.

And that’s no bad thing in our eyes. Particularly in Lapiz Blue – a colour unique to the R – the T-Roc looks really rather good, with just a handful of ‘R’ badges helping to distinguish it from the rest of the T-Roc line-up. We think this under-the-radar approach to styling will appeal to many.

The interior of the T-Roc R is pretty standard Volkswagen fare, but that’s no bad thing. The cabin has a general feeling of solidity, despite some plastics feeling a little low-rent. The seating position, as we’ve mentioned, feels sporty and well-thought-through, while there’s plenty of adjustability so you can easily get comfortable. The seats themselves provide plenty of support, too.

Seating in the back will be a touch tight for adults, but kids will have plenty of space back there. The boot capacity is good too; there’s 392 litres with the seats in place, rising to 1,237 litres with them folded down. There’s more than enough space for most occasions, in fact.

There’s plenty of standard equipment included with the T-Roc, which is what you’d expect from a car starting at just over £37,500. The eight-inch infotainment system is the same as we’ve seen in other Volkswagen models, and it’s easy to operate thanks to the intuitive operating system – though the inclusion of Apple CarPlay and Android Auto will likely see many people bypass this in favour of mirroring their smartphones.

There’s also a 10.23-inch driver display which replaces the conventional dials, and this features clear and easily-read graphics, which can be tailored to show a variety of different readouts. ‘Our’ test car also came with a smattering of options, including a ‘Beats’ sound pack with a larger subwoofer and keyless entry which came with additional costs of £425 and £395.

The Volkswagen T-Roc R arrives as one of the most well-rounded performance crossovers we’ve tested. Say what you like about the niche, this Volkswagen corners, steers and accelerates in an impressive fashion. Yet it does the daily jobs well too; it’s practical, comfortable and has a good amount of visibility.

Though we’d often recommend a regular hatchback over a crossover, the T-Roc R feels like an exception to the norm. In fact, if you’re after a performance car angled towards family use, then the T-Roc R could really fit the bill.