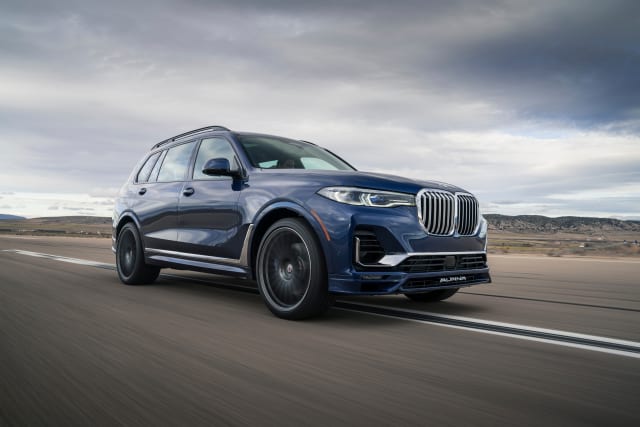 Alpina has lifted the lid on its latest creation – the XB7.

It’s enough power to send the SUV from 0-60mph in just four seconds – and it’ll hit a top speed of 180mph too. Underneath, there’s a two-axle air suspension system which offers the ability to change the ride height by up to 40mm depending on the driving situation. Huge 23-inch alloy wheels sit on all four corners, with an intricate 20-spoke design helping the XB7 to make an even stronger impression out on the road.

The air suspension system allows the driver to lower the car’s centre of gravity for more spirited driving, or raise the ride height to improve overall comfort.

Retaining the seven- or six-seat configuration of the regular X7, the XB7 features high-end touches such as a crystal glass iDrive controller – which operates the infotainment system – and a three-part panoramic sunroof.

The exterior of the car, meanwhile, incorporates trademark Alpina design touches such as a lower and more prominent front splitter as well as quad exhaust pipes at the rear of the car.

Though UK prices have yet to be announced, Alpina states that the XB7 will cost from €155,000 in Germany – so expect prices here to be in the region of £140,000. It is, however, available to order now.