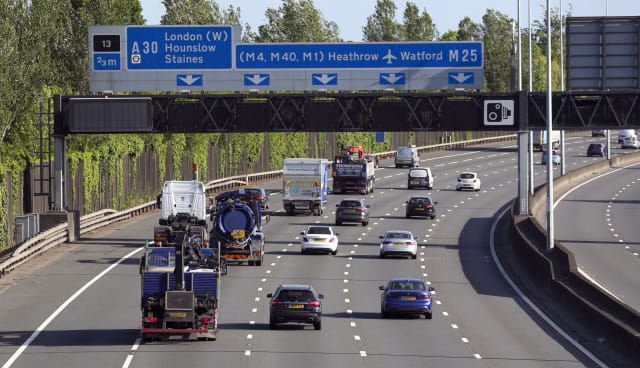 An estimated 15 million leisure trips will be made by car in the UK this weekend after lockdown restrictions were eased in England, a new survey indicates.

Nearly half of the journeys will be no more than 10 miles long, the RAC poll suggests.

A total of 1,317 drivers were surveyed after Prime Minister Boris Johnson announced on Sunday that some travel restrictions would be lifted.

Some 46% of respondents said they planned to take a leisure trip by car this weekend.

Taking into account the number of licensed cars on the road, the RAC calculated that an estimated 15 million trips will be made across Saturday and Sunday.

One in five (23%) drivers said they were planning to drive up to 10 miles to reach their destinations.

Some 11% will drive between 11 and 30 miles specifically to reach a beach, while 6% will travel a similar distance to get to a national park or other beauty spot.

One in 20 drivers (5%) said they expect to drive more than 30 miles for recreation.

RAC spokesman Rod Dennis said: “In normal times, the weather warming up in time for the weekend would spell traffic jams on routes leading to tourist hotspots.

“These figures suggest that’s less likely this weekend, with the vast majority of drivers we surveyed not jumping at the chance to drive very much further afield.

“Most are choosing to stay very local indeed or even not getting in the car in the first place, which bodes well for control of the coronavirus.

“As guidance on movement hasn’t changed in either Scotland or Wales, English drivers should regard the borders to these countries as effectively closed for leisure trips or potentially face a fine.”

The easing of the lockdown in England means people can drive as far as they want to exercise outdoors, as long as they do not spend the night away from their home.

But several tourist boards are urging people to stay away due to fears they will be overwhelmed by visitors.

Anyone who does hit the road will take advantage of the lowest fuel prices since 2016.

Supermarket Morrisons reduced its petrol prices to a maximum of 99.7p per litre on Monday.

Meanwhile, the AA reported that two out of every five callouts it is dealing with are due to battery problems, as drivers attempt to start cars left idle for several weeks.