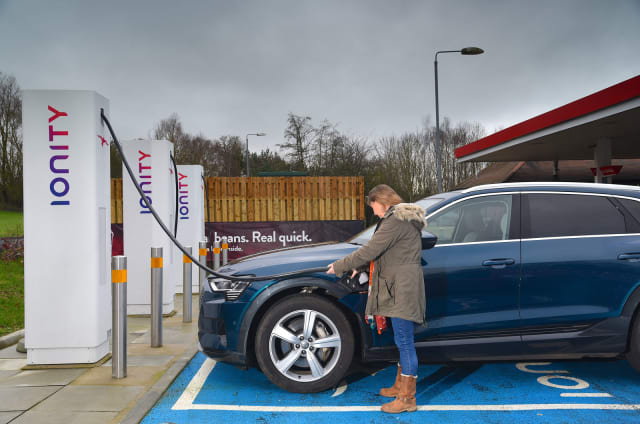 The government has given an insight into its plans for a nationwide network of rapid electric vehicle chargers to accelerate the country’s move to ban the sale of petrol and diesel cars by 2035.

The Rapid Charging Fund was announced in the March 2020 Budget, but now the Department for Transport (DfT) has shared its goals for the fund, which will contribute towards upgrading charging infrastructure to meet future demand.

The DfT says it hopes to have at least six fast chargers – those capable of charging between 150 and 350kw – at all motorway services areas in England by 2023, with some larger sites having 10-12.

It says these chargers are capable of delivering around 120 to 145 miles of range for every 15 minutes a vehicle is plugged in, making a quick battery top-up more viable on long journeys.

By 2030, the organisation wants to have around 2,500 fast chargers across England’s motorways and major A roads, with that number increasing to about 6,000 by 2035.

DfT analysis of the existing network indicates that drivers are never more than 25 miles from a 50kW-plus charger on any of England’s motorways or A roads, so it is confident that increasing the number of fast chargers to the targeted levels would meet future demand.

The government added that it was working with service operators to ensure these measures are in place ahead of demand to support early adoption of electric vehicles and remove range anxiety.

All new chargepoints must be easy to use and hassle-free – drivers will be able to pay using debit and credit cards even if they aren’t signed up to the specific supplier – have at least 99 per cent availability on each charger, 24/7 customer care and clear pricing details.