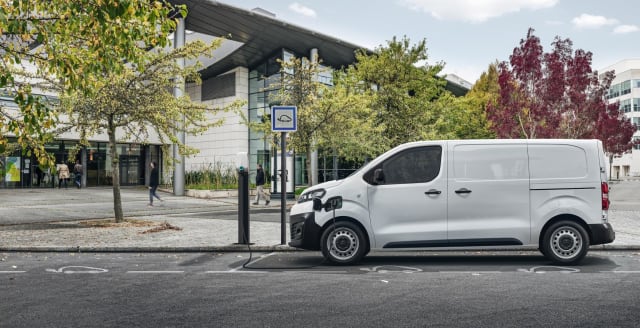 Citroen has revealed its latest electric model – the e-Dispatch.

Completely electric, the e-Dispatch van is capable of returning up to 205 miles on a single charge in its largest battery configuration, or 143 miles on a smaller battery version.

Set to hit showrooms during the second half of the year, the e-Dispatch will be joined by electric versions of the Relay and Berlingo vans next year, bolstering Citroen’s electric van offering.

The e-Dispatch’s batteries are mounted low in the chassis, which helps to maintain the van’s load volume. Three different body sizes are available – XS, M and XL – with payloads going from 1,000kg in the XS to 1,275 in the XL. All versions are capable of towing a tonne, too.

The battery and powertrain are also covered by an eight-year or 100,000-mile warranty.

Flat-out the e-Dispatch is rated to 80mph, while three different driving modes allow the driver to optimise the powertrain depending on the situation. Eco, for instance, optimises energy consumption by reducing the output of the heating and air conditioning. Power, meanwhile, delivers more punch when carrying a large load, making the performance equal to when the van is in Normal mode.

The e-Dispatch can accept a 100kW fast-charge too, which would take the larger 75kWh battery from empty to full in just 45 minutes. However, that charge time via a regular 7.4kW wallbox is around 11 hours and twenty minutes.

No UK prices for the e-Dispatch have been announced yet, though these are likely to be revealed closer to the van’s arrival in dealerships.

Bentley to cut up to 1,000 jobs under voluntary release programme