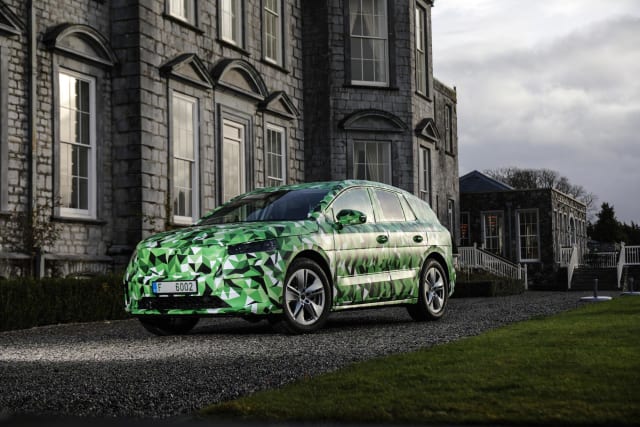 Skoda has teased its new electric SUV, which will spearhead the Czech firm’s zero-emission line-up.

The SUV will be the first of the firm’s vehicles to use the VW Group’s MEB electric vehicle platform.

This allows designers to free up more space in the cabin and have more control over the vehicle’s weight because it has been designed as an EV from the ground up, rather than adapting a car with a traditional piston engine.

Skoda says the Enyaq iV will be available with three battery sizes, with the largest having a range of 311 miles.

There will also be five power outputs to choose from, and the option of ‘fast charging’. Skoda doesn’t give a figure, but the Volkswagen ID.3, which shares a platform with the Enyaq iV, has a charging capacity of up to 125kW.

Further details are still limited at this stage, but Skoda says the electric SUV will be available with rear- and four-wheel drive, as well as having a 13-inch infotainment screen in the cabin.

Skoda CEO, Bernhard Maier, said: “The Enyaq iV marks the beginning of a new era for Skoda, it is the figurehead of our E-Mobility campaign.

“With it, we’re making E-Mobility ‘Simply Clever’ thanks to long ranges and short charging times. At the same time, the Enyaq iV takes Skoda-typical virtues such as superior interior space, a trendsetting design and maximum functionality to a new level.

“Our first all-electric e-model based on Volkswagen Group’s modular electric car platform will be built at our main plant in Mlada Boleslav, at the heart of Skoda. This is an important step towards securing the future of the location and safeguarding jobs in the region.”