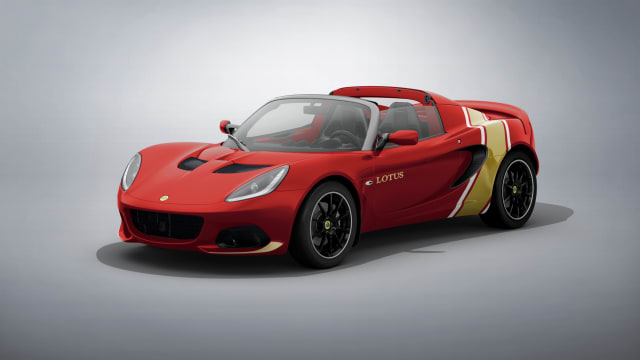 Lotus is paying tribute to its racing history through the introduction of four new limited-edition versions of its Elise sports car.

Four colour combinations are available with the Classic Heritage Edtion cars – of which just 100 are going to be produced – with each harking back to an original livery used by Lotus’ racing teams.

The first is a black and gold combination made famous by the Lotus Type 72D that Emerson Fittipaldi raced over the course of the 1972 Formula 1 season. A red, white and gold version pays tribute to the Type 49B that Graham Hill used in 1968, while a blue, red and silver car is inspired by the livery applied to the Type 81 of 1980, which was used by Nigel Mansell, Ello de Angelis and Mario Andretti.

Finally, a fourth colour combination of blue and white harks back to the design used on the Type 18 car of 1960, which was the first Lotus car to achieve a Formula 1 pole position and victory – thanks to some help from Sir Stirling Moss.

All cars are based on the Lotus Sport 220, but receive enhanced interior features and touches. Each gets a unique build plaque, too.

In addition, the Heritage Edition cars get a DAB radio, air conditioning and cruise control as well as forged alloy wheels and two-piece disc brakes – features which usually reside on the optional extras list for the Elise.

All are priced at £46,250 which, though commanding a premium of £6,340 over the standard Elise Sport 220, actually represents a saving given the £11,735 worth of additional extras it includes. The cars are on sale now.