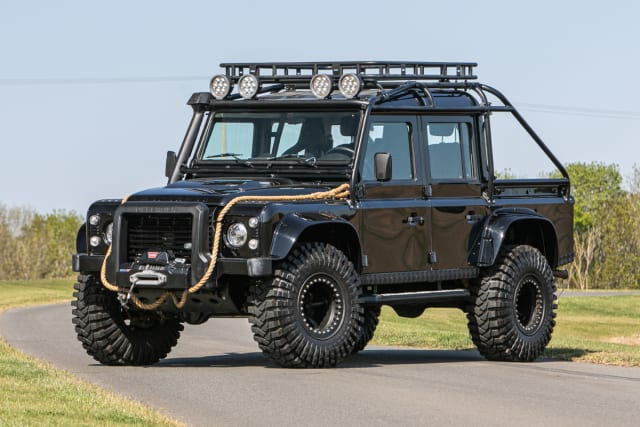 A Land Rover Defender which had a starring role in the James Bond movie Spectre is heading under the hammer at auction.

It’s one of just 10 cars of its type used in the film, with each of them created with the help of specialist Land Rover modification company Bowler Motorsport.

Massive 37-inch tyres are among the noticeable upgrades on the 110 pick-up, along with stiffened suspension and a heavy-duty rollcage. A hydraulic handbrake has also been fitted, while the engine’s output has been upped to 180bhp.

Just seven of the original 10 cars survived the movie, with three destroyed during the course of filming. This car is number nine of the fleet.

Nick Whale, managing director at Silverstone Auctions, who is conducting the sale, said: “This is a very special opportunity for someone to own a piece of Bond film history. The rarity of these means they don’t come to market that often.”

“Anything from the Bond franchise attracts worldwide interest and this Land Rover is almost as it was from the day it left the film set. It will need registering if you wish to use it on the road and it comes with a file of correspondence including details of when and where the car was to be used in the film.”

“This is a rare opportunity not to be missed.”

The car is being kept alongside other auction entries – which will go under the hammer via an online sale on May 23 – and can only be viewed via appointment only and in line with government guidelines. Buyers can place bids online, via the phone or through a commission bid.