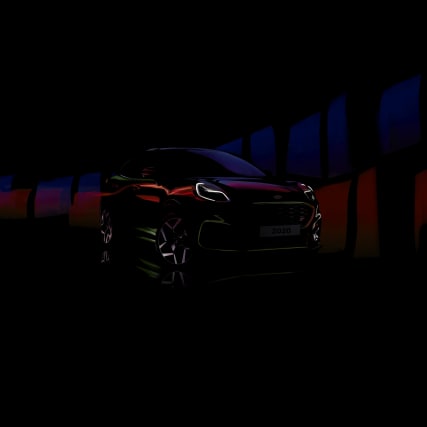 Ford has revealed a first look at its upcoming Puma ST performance crossover.

Due to arrive in the UK later in the year, the sporty crossover will join the Fiesta ST, Focus ST and Mustang in the firm’s range of performance vehicles.

Given that the standard Puma shares much of its underpinnings with the Fiesta, it’s likely that this new sporty version will use the same layout as the Fiesta ST.

It’ll see the Puma ST powered by a 1.5-litre turbocharged petrol engine with 197bhp and 290Nm of torque, sending drive to the front wheels through a six-speed manual gearbox. It’s likely that the Puma’s performance times will be similar to those of the Fiesta too, with 0-60mph achieved in around 6.2 seconds and a top speed of around 144mph.

Mechanical upgrades will be extensive too, with revised suspension, grippier tyres and larger brakes helping to differentiate the ST from the standard Puma.

A Performance Package will add a Quaife limited-slip differential, while different equipment grades will likely be badged ST-2 and ST-3.

Though no pricing for the Puma ST has been announced, we expect it to sit at around £27,000.