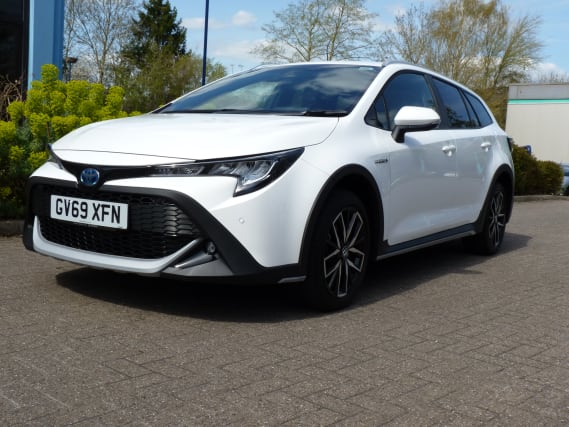 Toyota has announced pricing for its adventure-inspired Corolla Trek.

Built in partnership with American bike manufacturer Trek, it arrives in the UK priced from £29,225.

Based on the Corolla Touring Sports estate, the Corolla Trek uses a 1.8-litre petrol engine linked to an electric motor and batteries in a hybrid setup. Overall, it pushes out 120bhp while emitting just 113g/km CO2.

A larger and more powerful 2.0-litre version with 178bhp is also available – again, with hybrid technology – though this bumps the starting price up to £30,950. Emissions also increase to 121gkm CO2, as well.

Both powertrains send their power to the front wheels via a CVT gearbox.

The Corolla Trek gets a rugged overhaul to help differentiate it from the standard Corolla Touring Sports. This includes a variety of black plastic exterior cladding, a unique set of 17-inch alloy wheels and new front fog lamps too.

The most noticeable change is an increase of 20mm for the suspension alongside the introduction of protective skid plates for the front and rear to help minimise damage to the underside of the car when travelling on rough terrain. Despite its go-anywhere look, however, the Corolla Trek isn’t available with four-wheel drive.

Inside, there’s two-tone cloth seats, wood trim on the dashboard and a variety of Trek badges too. The main infotainment setup comes via an eight-inch display, bolstered by a seven-inch display ahead of the driver.