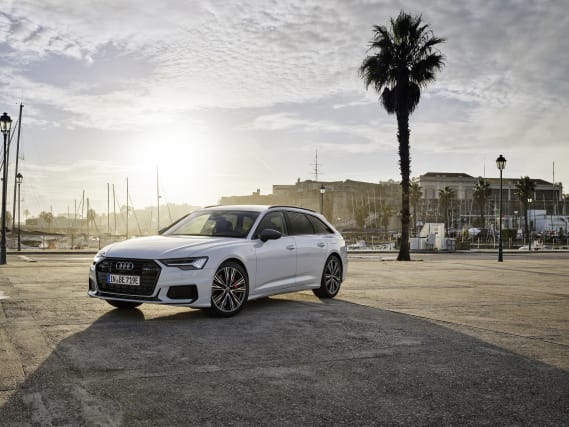 Audi has unveiled a new plug-in hybrid variant of its popular A6 Avant.

Based on the A6 Avant 55 TFSI e quattro, the model uses the same powertrain as the one used in the recently launched Q5 55 TFSI e and A7 55 TFSI e.

It combines a turbocharged 2.0-litre four-cylinder engine with a 14.1kWh battery pack and electric motor to produce a combined 362bhp and 500Nm of torque, which makes it more powerful than the performance-orientated S6 variant.

Power is then sent to all four wheels via a seven-speed automatic gearbox, and Audi claims that that the A6 will go from 0-60mph in 5.5 seconds before reaching an electronically limited top speed of 155mph.

It’s also capable of covering up to 32 miles on battery power alone – at speeds of up to 84mph – while economy sits at 148.6mpg with emissions of 44-48g/km CO2 depending on wheel size.

Audi states that when plugged into a 7.4kW charging point, the A6 will be able to charge to 100 per cent from flat in around 2.5 hours, while regenerative braking helps to top up the battery levels when on the move.

The inclusion of batteries does have an impact on boot space – reducing the room on offer from 586 litres in the standard A6 Avant to 405 litres.

Though full specifications for the UK-bound model have yet to be released, European versions receive 19-inch alloy wheels, Matrix LED headlights and a full S sports body kit. It’s likely that cars coming to the UK will receive the same level of equipment, alongside a sporty interior and Audi’s standard-fit 12.3-inch digital instrument cluster and 10.1-inch infotainment screen.

It’s expected to arrive in the UK later this year, and though prices have yet to be announced, this hybrid model is likely to cost from around £60,000.