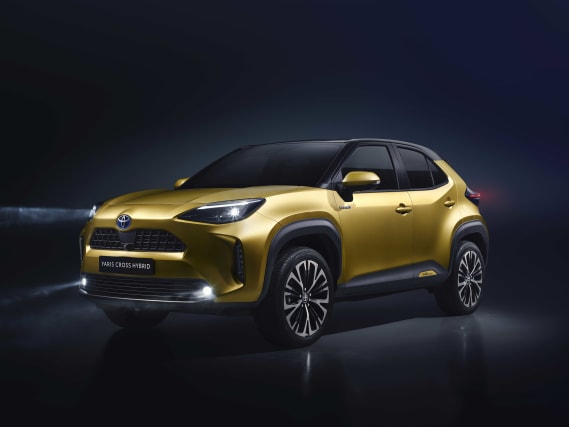 Toyota has entered into the compact SUV segment with its new Yaris Cross.

Built in France alongside the current Yaris and revealed today via an online presentation, the Yaris Cross aims to blend SUV styling with a more compact design than a traditional four-wheel-drive vehicle.

It’s the second model to use Toyota’s latest GA-B platform, which allows for more interior space and practicality within compact exterior dimensions. It’s 240mm longer than the Yaris (despite sharing the same length wheelbase), with overhangs which are 60mm more at the front and 180mm at the rear. A raised driving position is gained thanks to a bump in a ground clearance of 30mm – while the whole vehicle is 90mm taller than the Yaris.

Powered by a hybrid powertrain, the Yaris Cross combines a 1.5-litre, three-cylinder Atkinson cycle petrol engine with an electric motor and batteries. Toyota claims that this hybrid technology is more efficient than ever, with emissions for the front-wheel-drive model ‘below 90g/km CO2’ and 100g/km for the all-wheel-drive version.

Interior pictures of the car show a cabin dominated by a large central screen, which appears to show the inclusion of Apple CarPlay smartphone connectivity.

That all-wheel-drive version has been designed to offer more stability in poor conditions and on slippery surfaces. In standard driving, the Yaris Cross is predominantly front-wheel-drive, but when low-grip surfaces are detected, it switches automatically to power the rear wheels too.

Though prices are yet to be announced, expect the Yaris Cross to command a premium over the standard Yaris which comes in from £17,765.