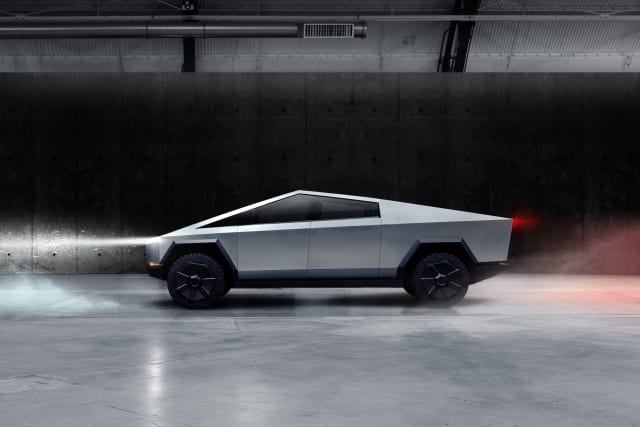 Elon Musk has taken to Twitter to confirm that the Tesla Cybertruck will be able to cross streams and ‘even float for a while’.

The American firm’s CEO is famous for making wild claims on Twitter, with his latest tweet coming in response to a Twitter user who asked if the upcoming all-electric SUV will be able to drive through water.

Wading depth is important to those who drive in the wilderness, with the likes of the new Land Rover Defender and Ford Ranger capable of driving at depths of up to 900mm and 800mm respectively. Floating is often considered undesirable when crossing water because it means the wheels no longer dictate the direction of travel, leaving the vehicle at the mercy of the current.

The Cybertruck was revealed last year at a typically bullish presentation from the South African entrepreneur. Its cyberpunk-inspired styling drew a mix of admiration and criticism, while a demonstration of the ‘bullet proof’ windows was marred by the fact they shattered after being hit by a metal ball.

Musk’s recent tweets have seen a combination of responding to Twitter users about Tesla and his SpaceX program, as well as questioning the media narrative on coronavirus. In March he was widely criticised for tweeting that “The coronavirus pandemic is dumb”.

However, despite this scepticism and the fact Tesla’s Fremont factory didn’t shut after local lockdowns were put in place until told to do so by the Alameda County Sheriff, Musk has pledged to reopen facilities for ventilator production ‘as soon as possible…to help the citizens of New York’.