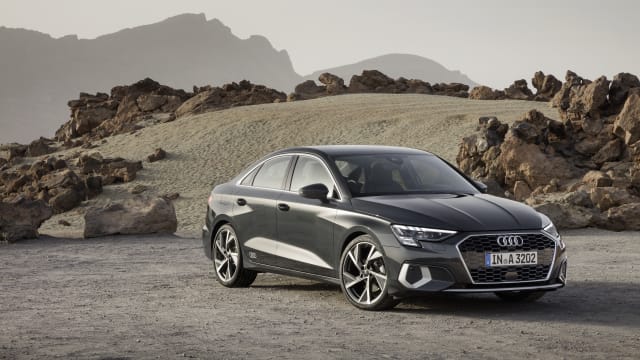 Audi has revealed its second-generation A3 saloon, which gets electrified powertrains and a tech-filled cabin.

Based on the recently revealed fourth-generation A3 Sportback, the saloon gets the same styling updates, such as the large front grille, angular headlights and air intakes, while a new body line that extends to the rear bumper is designed to emphasise the extra 15cm of length.

The new saloon's rear end sits higher than its predecessor's, which Audi says improves air flow when coupled with the large diffuser, making it more aerodynamically efficient than before.

Inside it's much like the A3 Sportback, with the 10.1-inch infotainment touchscreen angled slightly towards the driver and a 10.25-inch digital instrument binnacle included as standard. Buyers can upgrade to Audi's virtual cockpit, which provides a 12.3-inch screen with dynamic layouts.

The top infotainment system features the firm's latest generation technology, which it claims is 10 times faster than before. It also includes a Wi-Fi Hotspot, smartphone connectivity, and Car-to-X services that allow vehicles to 'talk' to each other to report hazards, for example. From the middle of the year, Amazon's Alexa personal assistant will also be included.

There will be one diesel engine and one petrol engine at launch. The petrol is a 1.5-litre unit making 148bhp, and is available with a six-speed manual or dual-clutch automatic transmission. Both gearbox options also see the engine get a 48-volt mild hybrid system to improve economy.

The 2.0-litre diesel engine makes 148bhp and is available with the seven-speed automatic gearbox. These engines will be joined by a 114bhp version of the diesel engine and a 109bhp 1.0-litre petrol unit shortly after launch.

UK pricing is not yet available but the entry-level 35 TFSI model will start at €29,800 (circa £26k) in Germany when it goes on sale at the end of April. Deliveries should begin in the summer.