Safety impact of e-scooters to be investigated by MPs 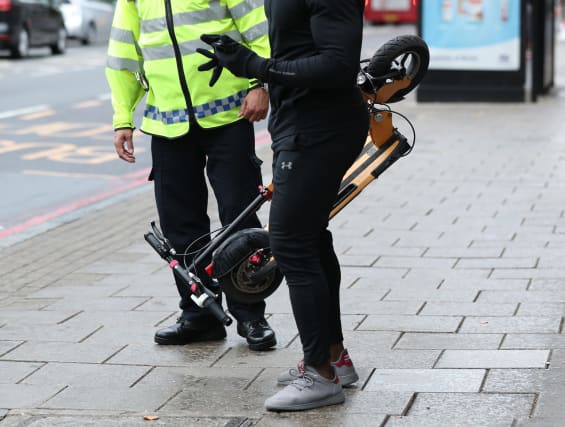 The potential consequences of allowing electric scooters to be used on UK roads are being investigated by MPs.

An inquiry has been launched into the possible impacts on safety, congestion and greenhouse gas emissions, the Commons Transport Select Committee announced.

The UK is the last major European economy where e-scooters are banned everywhere apart from private land.

In March, the Department for Transport began consulting on plans to trial their use on roads.

Huw Merriman, who chairs the Transport Select Committee, described road safety as a “significant consideration” in relation to e-scooters.

“We must consider the dangers to other road users and especially pedestrians with visual impairments or those who use mobility aids and rely on clear pavements,” he said.

“Safety must also be a factor for riders of e-scooters.”

The Tory MP acknowledged that e-scooters could be a “useful lever” to reduce the transport sector’s carbon footprint, but insisted “their environmental credentials have yet to be proven”.

He said that although legalising e-scooters could cut car use and congestion, we “don’t want to score an own goal” by encouraging people to use them instead of walking and cycling.

Mr Merriman added: “Are e-scooters something good and positive which will take traffic off the road – one part of what the Department for Transport describes as a ‘transport revolution’?

“Let’s see if those who respond to our inquiry agree.”

Many people use e-scooters in the UK despite them not being allowed on public roads and pavements.

YouTube star and TV presenter Emily Hartridge became the first person in the UK to be killed while riding an e-scooter when she was struck by a lorry in Battersea, south London, in July last year.

AA president Edmund King said the coronavirus pandemic is likely to lead to an increase in demand for e-scooters as some commuters will want to avoid public transport even once the lockdown is lifted.

He went on: “More than half of drivers believe that e-scooters should only be used on dedicated cycle lanes, but it would be unrealistic for users to have to hop on and off between lanes.

“Getting the right balance may prove tricky, but it doesn’t mean lawmakers shouldn’t try.”

Roger Geffen, policy director of charity Cycling UK, wants e-scooters to be legalised but with limits on their maximum speed and the power of their motors.

He said: “Cautious legislation can be relaxed if this proves to be justified. However, we can’t do the opposite and restrict faster or higher-powered e-scooters once people are already using them.”

David Renard, the Local Government Association’s transport spokesman, said: “Any regulation of e-scooters must be carefully designed so it is appropriate for different areas.”

The closing date for written evidence to be submitted to the committee is June 2.