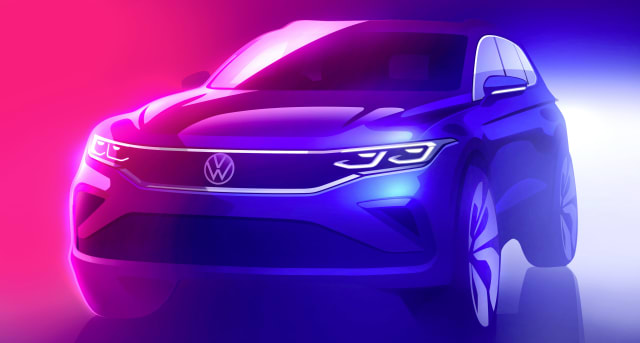 Volkswagen has given a glimpse of what its facelifted Tiguan will look like in a new official image.

The new SUV is expected to arrive this summer and is likely to hit the road with more efficient engines and upgraded interior technology.

Design-wise the sketch indicates a fresh new look for the Tiguan, with slimmer and more angular lights extending into the front wings. It’s a similar look to that seen on the recent eighth-generation Golf model.

Underneath the main grille appears to be a wider front splitter, which looks more dynamic in its style than that found on the current Tiguan. There’s a good chance that the new headlights will incorporate the very latest LED technology, too.

The interior of the Tiguan will likely feature the same overall look as that found on the new Golf, which will see a large central touchscreen bolstered by a digital display ahead of the driver.

As well as cleaner, more efficient petrol and diesel engines, the new Tiguan is due to arrive with a plug-in hybrid powertrain similar to the one expected with the upcoming Golf GTE.

The Tiguan has been a hugely popular model for the German firm. Now Volkswagen Group’s most successful model and the best-selling SUV in Europe, more than six million Tiguans have rolled off the production line since its debut back in 2007.

Last year, a new Tiguan rolled off the production line every 35 seconds at Volkswagen’s plants in Germany, Russia, China and Mexico.