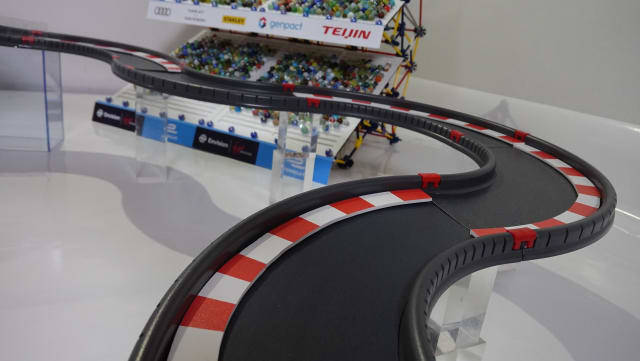 Envision Virgin Racing has come up with a unique way to fill the void left by traditional motorsport events being cancelled due to the coronavirus pandemic.

The team, which competes in the all-electric Formula E racing championship, has teamed up with the Jelle’s Marble Runs YouTube channel to broadcast ‘Marbula E’ races online.

The channel surged in popularity recently when its elaborate marble races went viral. Competitions involve a number of marbles being let loose on complex courses, with viewers encouraged to pick a marble and follow it to the finish.

Like most sporting events, real Formula E races have been cancelled and postponed this year because of lockdown rules that prevent people gathering in large groups. To fill the ‘motorsport void’, Marbula-E races will be held at the time the real Formula E races were originally scheduled for.

The first race will take place Saturday, April 18 at 11am BST, which was the original date of the Paris E-Prix.

Sylvain Filippi, Envision Virgin Racing’s managing director, explained: “Normally, when we talk about marbles in motorsport we’re referring to those fragments of tyre rubber deposited on the track, but in this case we’re talking about something very different.”

“Obviously, we are all going through very unsettling times right now but as we’ve seen with the growth of esports and virtual horse racing, people still need sources of entertainment – and sport plays such an important part of that. As I say to my team, everyone’s mental wellbeing is so crucial during this lockdown period and we hope this puts a virtual smile on the faces of all our fans and many others. People might think we’ve lost our marbles but actually we’re just racing them!

“The concept might not be that serious, but the production and set-up are. Like the actual races, events will include a qualifying session, scale replicas of the circuits, grandstands, TV-style graphics and even commentary from the voice of Formula E Jack Nicholls. Races – or M-Prix as we like to call them – will feature 12 marbles, with Envision Virgin Racing in the team’s iconic purple. Sadly, there’s no Attack Mode or FanBoost, but we’re working on that!”