These are the best classic cars brought up to date 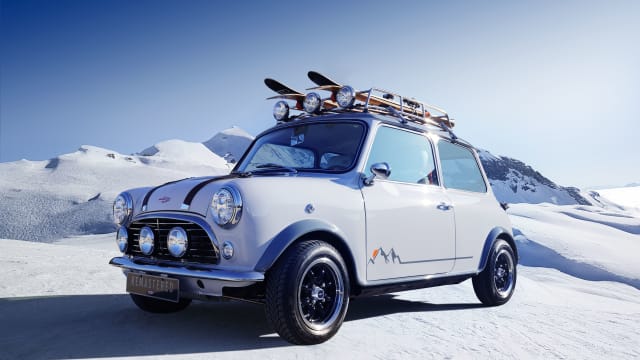 Though we all love classics cars – and who wouldn’t – they do have their drawbacks. Reliability is one of the key ones. Who hasn’t been driving down the motorway, snug and warm in a new motor, only to see a conked-out classic smoking away at the side of the road, owner perplexed and ranting to the breakdown company on the phone.

It’s why so many companies like to modernise their classics. It keeps the style, charm and character that you want from an old-school car, but takes away the will it start-won’t it start headache you get with a troublesome classic. Let’s take a look at some of the best.

Sometimes if you want a Jaguar restored properly, it’s best to go to Jag themselves. It’s showcased this with the E-Type Reborn, a completely ground-up, nuts-and-bolts restoration of one of its most iconic models.

The first is a 1965 Series 1 Fixed Head Coupe 4.2, built back up to the original specification set by Jaguar when it was launched. Jag’s engineers had access to build records and original drawings to ensure that it was spot-on, while improved cooling, a full syncromesh gearbox and larger brakes were fitted too. It did come at a cost, mind you, with Jaguar asking £285,000 for each – ouch!

It’s a tough challenge to improve an icon, don’t you think? But David Brown Automotive, UK-based car restorer, believes it has done just that with its classic Mini. It’s been given a high-end overhaul, with LED illuminated dials, full leather upholstery and even an infotainment system.

And don’t worry, the engine has been given a looking over too. The standard 1330cc engine now pushes out over 83bhp and uses a five-speed manual gearbox. The brakes have been upgraded too, as has the exhaust system.

This is Singer’s Porsche 911, and to our eyes it’s one of the prettiest remastered cars ever made. Don’t you think it just looks fantastic?

But it’s not just looks, either. Underneath it gets a modern chassis, modern brakes and suspension and a modern engine too – so it goes just as well as it looks. It’s an impressive piece of machinery, this one.

Aston Martin knows a thing or two about making beautiful cars, and the DB4 will likely go down as one of the best-looking of all time. But by modern standards, they aren’t that quick – and not that reliable, either.

Enter the DB4 GT Zagato Continuation. It takes all of the beauty and drama you’d want from the DB4, but delves under the skin to make things just a little better. The six-cylinder engine from the regular DB4 has been enlarged to 4.7-litres, and now pushes out a healthy 390bhp. It should go like a rat up a drain pipe, then.

The Lister Knobbly has a long and varied history, with a sparkling career in racing which began with the original car back in 1958. This modern version is built using original drawings and manufacturing jigs, but still produces 330bhp from its 3.8-litre engine. In fact, 0 to 60mph takes just 4.3 seconds in the Knobbly.

Though a true racing car, Lister make a road-going knobbly, which means that you can get out on the streets in a real classic – or at least a continued one, that is.

Forged alloy wheels, an carbon-fibre chassis and integrated roll cage all show how serious this CTR is. And yet, it’s still a 911 at heart!

The troubled DeLorean had a short and swift life. The brief glimmer of one of the most iconic gullwing cars of all time made a sizeable impact on the motoring world, as well as popular culture thanks to its inclusion in that time film.

But what people won’t tell you is that the DeLorean wasn’t all that good. It’s why the DeLorean Motor Company – a new enterprise based in America – is rebuilding the famed car with new parts and a more powerful engine. A Hollywood star with a bit more impact, you could say.

The huge Bentley Blower was a sizeable presence on the motoring scene back in 1929, mainly thanks to its colossal proportions and 4 ½-litre supercharged engine. It was a colossus of the time and continues to be today.

And Bentley, being Bentley, has decided to revisit the icon by creating several ‘continuation’ models. To do so, they’ve taken apart their own factory Blower and categorised each and every part to create a digital model of the car. From there, they create identical parts to create identical Blowers – it’s clever stuff, that’s for sure.