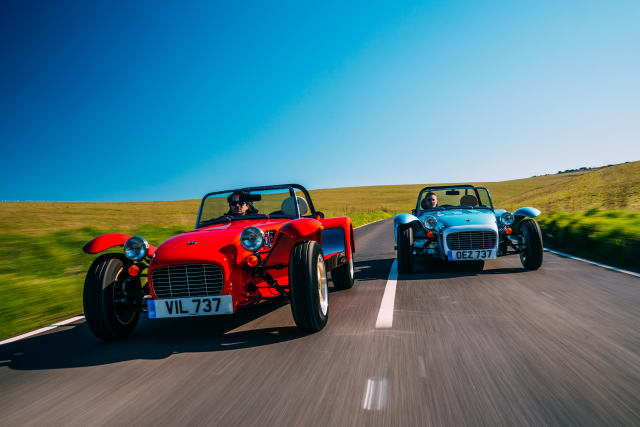 Caterham has launched another retro-inspired version of its famous Seven sports car – the Super Seven 1600.

Inside, the Super Seven features a wooden-rimmed steering wheel as well as classically tailored leather seats.

It’s also offered in two chassis sizes, with both standard (S3) and wide (SV) incorporating the retro looks. The model uses a 1.6-litre Ford Sigma engine driven through a five-speed manual gearbox to the rear wheels, with 135bhp and 165Nm of torque equating to a 0-60mph time of 5.0 seconds and a top speed of 122mph.

It also includes DCOE throttle body injection – the type found on rally cars of the 1970s.

Graham Macdonald, Caterham CEO, said: “Caterham has always been about individuality and the quality engineering that makes the Seven peerless when it comes to the driving experience.

“Ownership of any specification of Caterham Seven is a mark of distinction and a ticket to driving adventure, but our heritage line of models holds a special place in the hearts of the true brand enthusiasts. Both of our most recent retro-inspired Sevens – the Sprint and Super Sprint – sold out in record time so we know the appeal for these cars is strong.

“We’re excited to introduce the most powerful Super Seven ever built, a reimagining of a true modern icon, delivering exactly what the original was designed to offer – a focus on driving feel and race-inspired upgrades but with some touches of luxury to the finishes.”