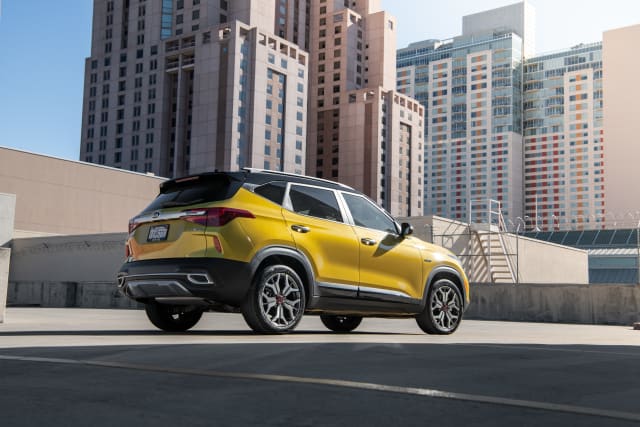 Car manufacturers sell cars all over the globe, but what’s appropriate for one country might not be appealing in another. That’s why they often have a huge range of cars, with only a few core models for sale in each market.

South Korean car maker Kia is no different, and it has shared some of the vehicles it sells around the world that you might not have heard of, because they’re not sold on these shores.

Despite having K9 in the name you probably won’t want to take your dog out in this large saloon, because it’s Kia’s flagship luxury vehicle. It’s on sale in various markets, but has proved particularly popular in Korea and North America, where it has helped push the brand’s image upmarket.

There’s a 5.0-litre V8 option, which is the most powerful engine ever in a Kia, as well as a more subdued V6.

New to the firm’s line-up, the Seltos was only introduced in 2019. It’s a compact SUV that wears the firm’s chunky but aggressive design language well, something that’s true of all the firm’s new SUVs, as you’ll see in the rest of this line-up. The Seltos is built in India and Korea.

While the Soul EV has won plaudits for being a handsome and capable electric vehicle, the firm’s first EV was actually the Ray EV, launched in 2011.

It was only sold in the firm’s home country of South Korea and had a 50kW electric motor and 16.4kWh battery, which gave it a range of 86 miles. Not a huge range, but its tiny dimensions made it a car best-suited to city driving duties.

Sold in markets outside Europe, the Soul is available in Kia’s sporty GT-Line trim. While it doesn’t transform it into a performance car, the front and rear body kit, 18-inch alloy wheels, red styling accents, and sports-tuned suspension help give it that appearance. And with a 201bhp, 1.6-litre turbocharged petrol engine, it certainly isn’t slow.

If you’ve seen the new Sportage and thought it looked great, you have the popularity of this massive America-only SUV to thank.

It’s the largest passenger car the brand has ever built and can seat up to eight people. It’s available with a 291bhp, 3.8-litre V6 and all-wheel-drive, and was one of three finalists in the 2020 World Car of the Year Awards.

Further proof of the success of Kia’s move upmarket is the Cadenza, which is another premium saloon from the firm that’s not sold here. It looks great and gets loads of on-board technology with plenty of interior comfort features. Its 3.3-litre V6 delivers 290bhp.

The 2020 version was revealed in February at the Chicago Auto Show.

It’s not just premium passenger cars at Kia, with this cool little pick-up truck also rolling off the firm’s production lines. The K-series truck has been designed to offer maximum load capacity within relatively small dimensions. The truck is also known as the Bongo.