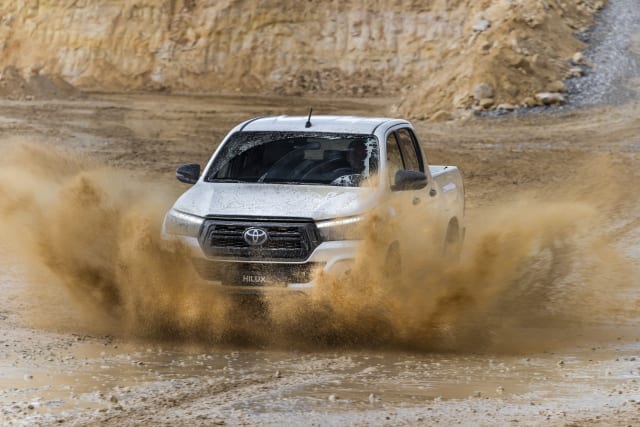 While pick-up trucks are among the best-selling vehicles out in America, here in England they’re considered a rather more niche product. However, with their load beds out back making it easy to transport large items or loads you wouldn’t want damaging the interior of a traditional car, they’re incredibly useful for many people.

So whether you’re a farmer, gardener, builder, or simply a mountain bike enthusiast tired of carrying your muddy bike in the back of your car, here is our pick of the best trucks you can buy today. Of course, current advice states that you should only leave the house when absolutely necessary, but browsing through some of the best pick-ups on sale can be done from the safety of your home – so let’s dive in and have a look.

Nissan’s Navara is another old favourite. Well-proven and exceptionally reliable, the Navara continues to be one of the most dependable workhorses around. Like the Hilux, it’s been treated to some choice new options, but it still remains a true off-roader at heart.

The Navara is a tried-and-tested load-lugger, with even base-spec models coming equipped with the very best off-road mechanicals to ensure you get exactly where you need to.

Ford’s latest Ranger is available in a variety of different specifications, meaning that there’s one to suit nearly every occasion. Standard XL models are ideal for those who want a tough, no-nonsense worker, while Wildtrak variants are there for those who are fancying a bit more time off-road. There’s even the ultra-performance Ranger Raptor – though that does technically come under Ford’s ‘Performance’ banner.

In short, there’s a Ranger for everyone. As one of the most robust on this list, it’s one of the very best for those who want a truck that’ll deliver each and every time.

When you need a pick-up truck, many people turn straight to the Mitsubishi L200 – and rightly so. It’s easy to maintain, is tough out on the road and features an impressively robust interior. It’s starting to lag behind rivals here in terms of its driving experience – it lacks the on-road manners of others – but when the going gets tough, the L200 rarely gets stuck.

The latest model debuts an all-new look, which has given it a more futuristic, edgy appearance. Make no mistake though, the L200 still gets the job done.

The Hilux name is one of the most well-known in the business and epitomises that go-anywhere attitude that has people flocking to the pick-up segment. The latest version takes that mentality and builds on it, adding some much-needed creature comforts without forsaking robustness.

It also looks the part, with big angular proportions that make it look like it’ll manage to go through any terrain – even before you’ve turned the key.

While many mainstream car manufacturers make pick-up trucks that are more pleasant to drive with nicer interiors than ever, Isuzu feels a bit old school – and that’s where its appeal lies.

Its ride is awful when the load bay is empty, the interior of all but the highest-specification models would have been decent 10 years ago but feel dated now, and the four-cylinder diesel engine is noisy and unrefined. But it’s ridiculously capable off-road and you won’t feel bad about chucking work supplies in the back. A true workhorse, then.

Speaking of pleasant mainstream pick-up trucks, we have the Amarok, which brings smart looks and a well-made interior with high-quality parts pulled from the firm’s road cars.

It’s also one of the best driving trucks on the market with impressive road manners that mean it could feasibly replace your large estate or SUV as your new lifestyle vehicle. That doesn’t mean it can’t handle going off road though, with diff locks and a low-range gearbox offering the best of both worlds.

You might not be too familiar with the SsangYong name, but get used to seeing it around because this little-known South Korean manufacturer builds some brilliant cars.

What they lack in European-quality interiors they more than make up for in capability, and the diesel engines are some of the smoothest in the pickup market today. The result is a car that’s surprisingly great to drive on the road, too. The firm is on a sharp upward trend, meaning they offer great value for money at present, and can be considered a well-kept secret for now…