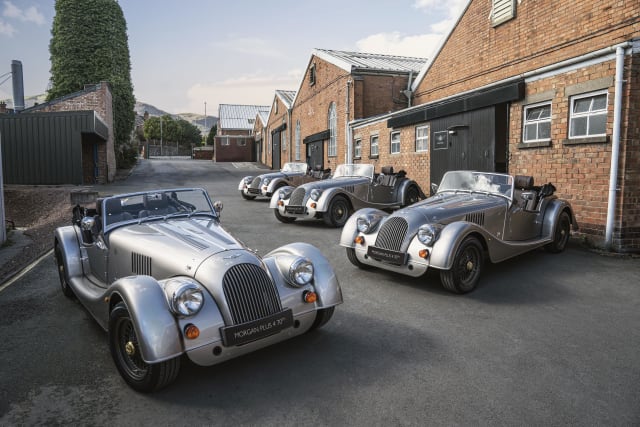 The first four Morgan Plus 4 70th Anniversary models have rolled off the firm’s Malvern production line, having been completed just before Morgan closed its factory for one month in response to the coronavirus outbreak.

The cars, which are limited to just 20, are priced at £60,995 each and celebrate seven decades since the car’s 1950 debut. These will be the last Plus 4 vehicles to incorporate a ladder chassis before the car switches to a new CX bonded aluminium platform for the next-generation vehicle.

Finished in a platinum exterior paint, each car has its chassis painted gold with satin grey wire wheels on all four corners. Inside, you’ll find an individually numbered dashboard plaque, alongside heated seats and a fascia finished in Ravenwood.

The car’s engine has also been boosted by Morgan’s in-house performance team – Aero Racing — pushing power up to 180bhp from 154bhp. Morgan believes that this will see the Plus 4 go from 0-62mph in ‘less than seven seconds’.

Steve Morris, Morgan chairman and chief executive, said: “It has been fantastic to witness the first Plus 4 70th Anniversary models complete production. They represent the last steel chassis models, and we are delighted to be able to celebrate such a significant milestone in this way.

“It’s a poignant moment as the first CX-Generation Plus Four models are built alongside the final steel chassis Plus 4 models. We feel that both models represent the true qualities of a Morgan sports car.”

Morgan’s announcement of temporary closure is the first time that the company will have locked its doors for an extended period since World War II.